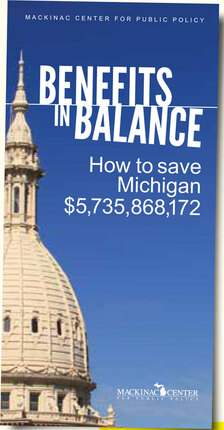 Michigan could end its annual budget problems, eliminate the Michigan business tax, avoid a pension tax increase, resurface miles of roads and still have money left over if the state simply brought the fringe benefits of public employees in line with private-sector averages. Bringing this disparity into balance would save $5.7 billion, according to Fiscal Policy Analyst James Hohman. Gov. Rick Snyder’s budget reflects these findings and calls for reforming the compensation packages offered to public employees in Michigan. 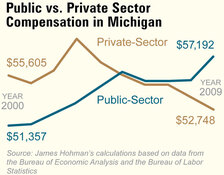 These budget recommendations validate years of the Center’s work on this issue.

While the Center has published material highlighting outsized public-sector compensation since at least 1995, its call to bring benefits into balance began in 2009. Leon Drolet — former legislator and president of the Michigan Taxpayers Alliance — asked the Mackinac Center, “How much could the state save if it brought the benefits of public-sector employees in line with private-sector averages?” Hohman and Center intern Adam Rule found the answer: $5.7 billion.

Since then, the Mackinac Center has worked to increase public awareness of these findings. A new Center website, www.BenefitsinBalance.com, shows the employment and pay disparities between public- and private-sector workers in Michigan, the public compensation packages that have been largely protected from recession, and analysis of government benefits compared to those in the private sector.

The Benefits in Balance message spread across the state, appearing in most of the state’s major newspapers, and even out-of-state media like the Chicago Tribune and Forbes Magazine. Center analysts have discussed this issue on radio programs in Detroit, Ann Arbor, Battle Creek and Petoskey. The enormity of the savings is reiterated in Michigan Capitol Confidential, the Center’s daily news site.

The findings have also drawn fire from defenders of public-sector employee unions. Three studies from union-friendly sources have argued that adjusting for education levels eliminates the disparity. Hohman, however, found that direct comparisons between support staff, teachers, prison guards, secretaries and physicians all show the government employees to be more expensive than their private-sector counterparts.

The Michigan House Fiscal Agency indirectly supported the Center’s analysis when it reported that the number of state employees has fallen, yet their increased total compensation has negated all of the savings.

Legislators have introduced bills to require employees to share more of the burden of their benefits and have asked Center staff for other money-saving ideas.

Only time will tell how much taxpayers see from the available $5.7 billion. But thanks to Hohman’s analysis this number is now the standard for judging how well policymakers are addressing government employee costs.

How to save Michigan $5.7 billion annually

It happens like clockwork. Every year state officials struggle to balance the budget. They propose or pass tax increases, threaten to cut programs and fight to protect pet projects. Policymakers assure us that government has been “cut to the bone.” They bemoan what they say are inadequate revenues.

Is this annual spectacle unavoidable, like the changing of the leaves? Is Michigan helpless to remedy its economic malaise and yearly budget crises?

Not at all. Michigan can fix its economy, control government spending, save for the future and improve infrastructure with just one idea: Benefits in Balance. The gap between what private-sector workers and public-sector employees receive in benefits amounts to $5.7 billion annually. Bringing this disparity into balance will save the state this amount without cutting a single program, lowering anyone’s wages or laying off a single employee.

How big are the disparities?

Best of all, this could be accomplished with: