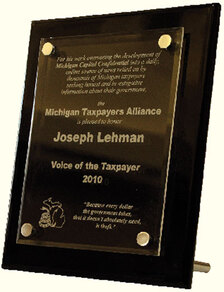 By continually breaking stories to an active and influential audience, Michigan Capitol Confidential has continued to grow in influence following the historic 2010 election.

On Dec. 17, the Michigan Taxpayers Alliance awarded Michigan Capitol Confidential with its “Voice of the Taxpayer” award for filling the “void left by lazy and/or biased news media.” CapCon was commended for producing “real, hard-hitting investigative journalism on behalf of taxpaying citizens.”

What sort of accomplishments was the MTA award referring to?

On Dec. 21, Michigan Capitol Confidential posted an article about the West Bloomfield School District, noting that teachers had been eligible for a 173 percent increase in pay over the previous 11 years. There was an ongoing labor dispute because the district could no longer afford to pay those costs. The dispute exploded on Feb. 15, when 40 percent of the teachers at West Bloomfield High School refused to show up for work, staging a “sick out” to evade the state law prohibiting teacher strikes.

This article marked the second time in a year that Gantert’s Michigan Capitol Confidential work has appeared on Drudge. In his 20-plus years at Michigan newspapers like the Lansing State Journal and the Ann Arbor News, he did not ever have a single article picked up by Drudge.

Some other examples from the last few months:

As readership expands, Michigan Capitol Confidential continues to investigate the actions of public officials and the effect of public policies on Michigan residents.