Tiny fraction of wetland in question 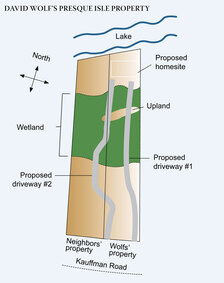 DAVID AND BEVERLY Wolf always wanted to retire to a beautiful waterfront home. In 1984 they purchased their dream property in Presque Isle, Mich., with plans to develop it. The upland area adjacent to the shore seemed ideal for building.

Following their retirement in 2000, the Wolfs requested a wetland permit to construct a driveway, since the driveway would have crossed 197 feet of wetland on their property between a nearby road and their proposed homesite (see diagram). Although the driveway would have filled just 0.22 percent of the 36-acre wetland, the Michigan Department of Environmental Quality denied the permit.

The Wolfs were taken aback. As long-term members of the Sierra Club, they were committed to protecting the environment, and they had actively lobbied on behalf of environmental issues in both Lansing and Washington, D.C.

Feeling the DEQ had failed to appreciate the soundness of their approach, the Wolfs appealed. After three days of testimony, Administrative Law Judge Thomas Woods issued a "proposal for decision" in the Wolfs' favor and recommended that the department grant the permit. His recommendation, however, was overturned by the DEQ.

The Wolfs then appealed to the Oakland County Circuit Court, where Judge Colleen O'Brien upheld the DEQ's decision. O'Brien indicated, however, that she had ruled based on a technicality. The Wolfs' permit application had in passing "mentioned construction of a residence" on the existing upland, making the residence's location a part of the permit and allowing the state to successfully argue that there was no need for the driveway, because it was feasible to construct the house elsewhere on the property.

The DEQ's proposed alternative was to build a residence in the upland adjacent to the road — over 400 feet from the lakefront. Testimony during the appeal established that a home built that far from the water would likely be worth less than the cost to construct it. A real estate broker and former supervisor for Presque Isle Township testified before Judge Woods that a home built where the DEQ suggests would be worth at least 40 percent less than the same home constructed on the existing lakefront upland.

After the first matter was concluded, the Wolfs became acquainted with the owners of the lot to the west. The neighbors had the same problem as the Wolfs, with a similar upland area that required access. They partnered with the Wolfs and submitted a joint application to construct a shared driveway. Due to the layout of the lots and the wetland areas, the single path along the shared property line would reduce the impact to the wetland area by approximately 28 percent, while also servicing both lots. This time the permit application was carefully written to omit a reference to a residence and to address only the construction of a driveway to access the lakefront.

The second permit was also denied by the DEQ. The Wolfs once again appealed the decision in an administrative hearing and called numerous experts to their property at that time, including wetland consultant Chuck Wolverton of King & MacGregor Environmental Inc. Wolverton has more than 35 years of experience in wetland and environmental consulting and helped establish the very wetland program that the DEQ now administers. Here is how David Wolf describes Wolverton's visit:

"When Chuck and I walked the project site, he got to the first wetland boundary and noted its characteristics. We proceeded on for the length of the wetland(,) crossing about 170 feet. When we arrived at the other boundary, he stopped, looked around with a quizzical expression, and exclaimed(,) 'This is it? You've got to be kidding me!' He could not believe that the permit had not issued, as it was such a small impact."

Unfortunately, the Wolfs' appeal was once again denied. They continue to pursue their legal options, but roughly eight years have passed since their initial driveway proposal. The Wolfs have lost some of their retirement years to endless legal wrangling, and while they yearn to build their dream home, their property remains vacant. To learn more about this travesty of property rights and environmental protection, see www.mackinac.org/9820.