'Hobbes vs. Locke': The battle continues 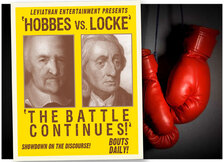 PROPERTY RIGHTS FORM the foundation of our political system; without them we have no freedom. Thus it is disturbing to see these rights eroded both in our courts and through bureaucratic action. The central role of property rights in our system of government must be reinforced.

The importance of personal property has been recognized by both friend and foe. James Madison, who has been called "the father of the U.S. Constitution," set forth government's duty concerning property as follows: "Government is instituted to protect property of every sort. ... This being the end of government, that alone is a just government, which impartially secures to every man, whatever is his own." In "The Communist Manifesto," Karl Marx and Friedrich Engels reduced their political beliefs to one central point. "The theory of the Communists," they wrote, "may be summed up in the single sentence: Abolition of private property."

While the conflict between communist and democratic states has had a monumental effect on the history of the last century, the current clash over the role of property rights in the United States and Michigan is less a vestige of those conflicts than of the philosophical battle between Thomas Hobbes and John Locke.

Hobbes' "Leviathan" was published in 1651. In it, he described the state of nature as one where, "(T)here be no propriety, no Dominion, no Mine and Thine distinct; but (only) that to be every man's that he can get; and for so long as he can keep it." Hobbes viewed the state of nature as one of war "of every man, against every man." He believed that in this natural state, "(E)very man has a Right to every thing; even to one another's body" and that a man's life would be "solitary, poor, nasty, brutish, and short."

Hobbes theorized that in order to escape this state of war, men needed to enter into a social contract that would guarantee each man's safety. He called this contractual entity a commonwealth and believed that it would allow men to repel "the invasion of (foreigners)" and "injuries of one another." The power to lead this commonwealth was placed in a sovereign. Hobbes recognized three types of sovereigns — monarchies, aristocracies and democracies — but he expressed a clear preference for monarchies.

Whichever form the sovereign took, Hobbes recognized certain fundamental attributes. A few examples follow: Once the government was in place, the people had no right to change the form of government; the people did not have the right to criticize it, nor could the people claim to be injured by the sovereign, because each man "is Author of all the (sovereign) doth"; and the sovereign had the right to "examine the Doctrines of all books before they are published." Most important to us here, Hobbes believed that the concept of individual property rights would lead to the destruction of the commonwealth and a return to the state of war:

"A ... doctrine that tendeth to the Dissolution of a Common-wealth, is 'That every private man has an absolute Propriety in his Goods; such, as excludeth the Right of the (sovereign).' Every man has indeed a Propriety that excludes the Right of every other subject: And he has it (only) from the (sovereign power); without the protection whereof every other man should have right to the same. But the right of the sovereign also be excluded, he cannot perform the office they have put him into, which is to defend them both from foreign enemies and from the injuries of one another; and consequently there is no longer a Common-wealth."

In sum, Hobbes believed in an almost infallible sovereign with nearly limitless power to take and use any and all property for the good of society. Individual rights did not exist; whatever "rights" an individual had were merely at the discretion of the sovereign and could be revoked at any time.

John Locke published his Second Treatise of Government in 1690. He viewed the state of nature quite differently from Hobbes. Locke believed that the state of nature was not one of continual war; rather, there is natural law "which obliges every one" not "to harm another in his life, health, liberty, or possessions." Locke continued, however, "(E)njoyment of the property he has in this state is very unsafe, very insecure." This explains why men would willingly leave the state of nature to join a political society: "The great and chief end, therefore, of men's uniting into commonwealths and putting themselves under government is the preservation of their property."

Locke believed that even in the state of nature an individual could own property — in other words, property rights pre-exist government; they are not merely a grant of government. In a natural state, man has a sole right to his own person and shares a right to all resources, but in applying his labor, he could convert common resources into his private property:

"Though the earth and all inferior creatures be common to all men, yet every man has a property in his own person; this no body has any right to but himself. The labor of his body and the work of his hands, we may say, are properly his. Whatsoever then he removes out of the state that nature hath provided and left it in, he hath mixed his labor with, and joined to it something that is his own, and thereby makes it his property. It being by him removed from the common state nature hath placed it in, it hath by this labor something annexed to it, that excludes the common right of other men. For this labor being the unquestionable property of the laborer, no man but he can have a right to what that is once joined to, at least where there is enough and as good left in common for others."

Thus, "As much land as a man tills, plants, improves, cultivates, and can use the product of, so much is his property." This improved land actually benefits society since cultivated land is much more productive than land "lying waste in common."

The creation of this property eventually allowed for exchange. As Locke noted, a farmer could trade plums for nuts and nuts for a piece of metal, or sheep for shells and wool for a diamond. The desire for profit was a powerful motivator to make man improve his condition (and thereby mankind's in general).

Locke believed that when a man in the state of nature joined society he did so "the better to preserve himself, his liberty and property — for no rational creature can be supposed to change his condition with an intention to be worse." He rejected the concept of an absolute sovereign; specifically, Locke repeatedly indicated that the government, no matter how constituted, could not take an individual's property without his consent. He accepted the concept of taxation, but only as a proportional share necessary to maintain government. Locke's sovereign could be challenged by the people, and the people maintained the right to overthrow a tyrannical government.

In sum, Locke believed that we all have certain inalienable rights and that these include rights over the physical goods and realty that constitute our property. Again, these rights exist with or without government, and government's job is to make this property more, not less, secure.

Our nation's founders clearly chose Locke over Hobbes. Madison's quote is Lockean, and Locke's ideals were embodied in the Fifth Amendment, which requires that takings be for a public use and that the owner be compensated, as well as requiring due process before an owner can be deprived of property.

At times, the federal courts have recognized our Lockean tradition and the centrality of property rights to all of our individual rights. In a 1972 case, the United States Supreme Court stated:

"(T)he dichotomy between personal liberties and property rights is a false one. Property does not have rights. People have rights. The right to enjoy property without unlawful deprivation .... is in truth, a 'personal' right. ... In fact, a fundamental interdependence exists between the personal right to liberty and the personal right in property. Neither could have meaning without the other. That rights in property are basic civil rights has long been recognized."

Despite this hortatory language, the federal courts have far too often failed to protect property rights. The 2005 Kelo v. City of New London decision is but one example; in that case, the United States Supreme Court essentially held that the government may take an individual's property and give it to another individual so long as the government believes that tax revenue might increase as a result.

The federal courts have held that the Fifth Amendment only requires a property owner to be compensated when regulation destroys almost all of a property's economic value. If some value remains, however, the state generally does not have to pay. Take for example a property owner who has a parcel that is worth $100,000. If the state enacts a law or regulation limiting the uses of that land and thereby lowers the land's value to $30,000, the landowner ends up paying a one-person tax of $70,000. But as Locke noted, only a proportional tax is fair and appropriate.

Over the coming weeks, months and years, we will endeavor to highlight the abuses and absurdities currently distorting our property rights. Clearly multiple actions are needed in order to achieve reform. One of the methods of effectuating change must be to re-examine first principles and ensure that policymakers and the public understand how far we have strayed from these principles. This country is rooted in Lockean ideas, but far too often embraces Hobbes' ideology, thereby inviting the authoritarianism and tyranny that come with it.