'Smart growth' is neither 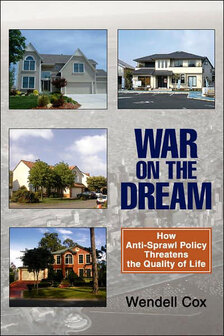 Wendell Cox's book "War on the Dream" exposes many of the myths of the smart-growth movement.

"SMART GROWTH" HAS been the orthodoxy of overzealous urban planners for some time. Although it sounds appealing at first blush, smart growth is nothing more than an anti-suburban policy. According to the tenets of smart growth, the perceived ills of urban sprawl can be cured if people abandon their automobiles, live in densely populated urban areas and travel by walking or mass transit. These actions would supposedly foster a sense of community and promote healthier lifestyles.

“THERE ARE TWO MAJOR REASONS TO WORRY ABOUT SMART-GROWTH POLICIES: LESS AFFORDABLE HOUSING AND LOSS OF PRIVATE PROPERTY RIGHTS.”

No matter how much smart growth is extolled as the preferred land-use policy, it will not succeed. Smart growth suffers from the same fatal flaw that plagues all central planning: a misguided belief that the planners somehow know what choices people should make and that people will make those "correct" choices if the planners institute the proper incentives.

However, a free people making free choices will vote with their feet. People in the United States and throughout the developed world are choosing suburbia over the city. In his book "War on the Dream," Wendell Cox noted: "Among metropolitan areas of more than 1,000,000 population in the high-income world, approximately 95 percent of urban growth has been in the suburbs. In the United States, Canada, Japan, and Oceania (Australia and New Zealand), more than 90 percent of the growth has been in the suburbs since 1965. In Western Europe the share of growth in the suburbs has been even greater, at 114 percent, reflecting the continued central city population losses."

Another major reason smart-growth policies fail is that they try to solve a nonexistent problem by preserving limited open space. According to Cox: "The human footprint (urban development, rural development, and agricultural land use) has decreased in the United States, Canada, and Australia, as significant amounts of agricultural land have been withdrawn and turned back into open space. In the United States, the human footprint has been reduced by 15 percent since 1950, an amount equal to the land areas of Texas and Oklahoma combined." Michigan follows this trend. The amount of urbanized land in Michigan comprises less than 10 percent of the state. Forestland in Michigan has actually grown by 2 million acres in the last 20 years (see www.mackinac.org/5653).

If smart-growth policies have largely been a failure, why should we worry about their future implementation? There are two major reasons: less affordable housing and loss of private property rights. Land-use restrictions that attempt to confine development to a core area increase the cost of property, a key component of housing prices. This may provide a windfall for developers, but increases the cost of owning or renting housing. Unaffordable housing disproportionately impacts lower-income residents, who often have a limited ability to relocate. According to Cox, there is a direct correlation between zoning restrictions and the affordability of housing. In fact, from 1995 to 2005, the unaffordability of housing increased five times more in urban areas with the most restrictive land-use policies than in cities without such restrictive policies.

Furthermore, implementation of smart-growth policies frequently results in the loss of private property rights. Landowners who purchased property prior to smart-growth restrictions are particularly affected. As noted previously, smart-growth policies frequently place restrictions on the use of private property, and affected landowners receive no monetary compensation for their loss. This has led Oregon and Arizona voters to pass citizen ballot initiatives to limit this abuse.

Smart growth is neither smart nor growth. Property owners seem to understand this. Perhaps it is too much to expect urban planners to get it, but let us hope state and local elected officials do.