A supporter of Measure 37 in Dundee, Ore., points to the property the proposal allows him to develop. (AP Photo/Greg Wahl-Stephens)

THE U.S. SUPREME Court's Kelo v. New London decision determined that it is legal under the federal constitution for the government to use eminent domain to seize private property and transfer it to private individuals or private economic development firms. The court justified this decision by interpreting "public use" to include private economic development projects that increase tax revenues and improve an area, thereby "benefiting" the public. After Kelo, many states passed legislation and amended their constitutions to define "public use" more narrowly in cases involving state and local government. 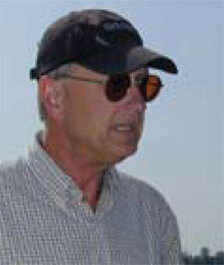 "Measure 37 is a piece of legislation that should be examined for both its strengths and weaknesses. It has potential as a template for use in Michigan."
—RUSS HARDING

Voters in Oregon had already done exactly that with Measure 37, which won with 60 percent of the vote on a popular ballot in 2004. Measure 37 requires the government to compensate individuals when government intervention reduces the value of their property. Furthermore, the government must compensate the property owner for the true loss in the property's market value, instead of choosing an arbitrary amount, as in many past eminent domain cases.

Before Measure 37, the $50,000 cost would have fallen entirely on Smith. Now the cost is borne by the public, the supposed beneficiaries of the regulation.

Measure 37 has great potential, though there have been mixed reactions to its performance. One issue relates to seniority and a property's date of purchase. In Oregon, land-use (zoning) rules were adopted in 1973. Under Measure 37, the government can hold a citizen to zoning regulations only if it can afford to pay compensation, but the government cannot generally afford the compensation required to keep all the zoning regulations passed since 1973 in effect. As a result, properties purchased prior to 1973 potentially face no zoning restrictions.

This outcome occurs most frequently with farmland, which in some cases jumps millions of dollars in value because of its potential to be subdivided and developed. Imagine, for instance, that Smith owned a 40-acre farm with a market value of $300,000 just prior to the passage of Measure 37, and that he purchased the farm in 1970, prior to the existence of land-use rules. After Measure 37 passed, the value of Smith's land increased to $3.6 million, because it can potentially be subdivided and developed. The government must then decide whether to compensate Smith $3.3 million or waive the zoning regulations on his property. In most cases, the government will not be able to make such payments, allowing Smith to develop the land however he pleases.

Situations like these have been common since the passage of Measure 37, leading some Oregonians to argue that Measure 37 is not fair to those who purchased land after 1973. It is worth noting, however, that people whose property ownership predates 1973 have watched zoning ordinances and other regulations repeatedly compromise the value of their land. Restoring that wealth to them may give them an advantage over their neighbors, but it is also arguably the right thing to do.

Several of the provisions of Measure 37 were subsequently overturned by Oregon's 2007 Measure 49, which reinstated some zoning restrictions that Measure 37 had otherwise nullified. Regardless, Measure 37 generally embodies common-sense principles. As Russ Harding, director of the Mackinac Center's Property Rights Network, observes: "Measure 37 is a piece of legislation that should be examined for both its strengths and weaknesses. It has potential as a template for use in Michigan." New legislation like Measure 37 would correctly allocate costs created by government intervention and protect the property rights of the people.