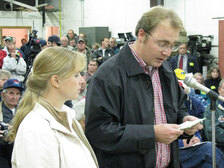 ON JULY 1, 2008, the Michigan Department of Environmental Quality denied a permit to Bustorf Dairy for a concentrated animal feeding operation (known as a "CAFO") in St. Joseph County's Leonidas Township. What is troubling in this case is not the permit denial itself, but rather the basis of the DEQ's decision, which relies more on social engineering than environmental science.

In response to Bustorf's claims that its operation would create jobs, the DEQ countered in a press release, "(F)igures provided during the public comment period showed that any jobs provided by the CAFO will lower the median wage level in the township and replace higher paying jobs and family income at smaller farms." In other words, instead of basing its decision on the agency's charter to preserve and improve the quality of the state's environment, the DEQ positioned itself as an advocate for the best interests of one business over another.

If left to stand, the decision sets a dangerous precedent, opening the door for the DEQ to deny permits for virtually any reason. Thus emboldened, the agency would be free — as it did in this case — to make further arbitrary judgments. For example, using the same rationale used to deny Bustorf the CAFO permit, the DEQ also could deny permits for a Home Depot because it might reduce income at a local hardware store. Similarly, it could deny a permit for a Gander Mountain store because it might compete with a local sporting goods store.

With the Bustorf decision, the DEQ apparently believes that it is uniquely qualified to centrally plan Michigan's economy. Put a different way, the agency is using its considerable weight to pick winners and losers in the marketplace. Mackinac Center scholars have provided considerable research into the poor track record of government agencies, such as the Michigan Economic Growth Authority, that attempt to do just this and ignore market realities. It is frightening to contemplate the DEQ also taking on this formidable task.

CAFOs have become increasingly common in modern U.S. agriculture due largely to economies of scale. Environmental groups are often critical of CAFOs, claiming they produce large quantities of animal waste that can potentially pollute surface and ground water. While it is true that CAFOs can and sometimes do cause environmental problems, the same can be said for other agricultural activities. However, the trend in animal agriculture is towards CAFOs that are usually more efficient and can produce more animals on less acreage. In my experience as an environmental regulator, large CAFOs have more resources to prevent or correct environmental problems than do small operations, which are often strapped for cash.

Regulatory certainty is at the top of the list for businesses seeking to invest in Michigan. Businesses will not invest in the state unless they know that if they comply with environmental requirements, they can be assured of obtaining the necessary permits. It is impossible to provide the certainty required for investment when DEQ goes beyond adjudicating environmental regulations and becomes an arbitrator of social justice, as it has in the Bustorf permit decision.

The Michigan Legislature needs to move aggressively to stop regulatory overreach by the DEQ. A good place to start would be to move all regulatory authority over agriculture from the DEQ to the Department of Agriculture. Following that, legislation is needed that specifically limits DEQ's authority to considering only technical environmental regulatory issues. In the absence of such action, economic investment in Michigan — and the much-needed jobs that come with that investment — will flee to other states with stabler regulatory environments.