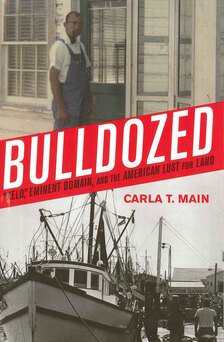 BULLDOZED: 'KELO,' EMINENT DOMAIN, AND THE AMERICAN LUST FOR THE LAND

IN "BULLDOZED," CARLA T. Main explores eminent domain abuse in the true story of the Freeport, Texas, property belonging to Wright Gore and his family.

In 1950, Wright Gore Sr. and his wife, Isabel, invested their life savings in a business called Western Seafood. The Gores "worked from can till can't" for many years as they developed the business. Eventually, Western Seafood outperformed all its competitors and became the only shrimping business on the Old Brazos River.

Western Seafood continued to grow, prompting the Gores to spend $1.7 million on a 30,000-square-foot concrete processing center with custom equipment. The company employed 56 people and became one of the largest sources of tax revenue in Freeport. Upon retirement, the Gores left the business to Wright Gore Jr. and Wright Gore III.

In the summer of 2002, the Gores received several phone calls expressing an interest in purchasing the Western Seafood property. The Gores informed the callers that the property was not for sale. This ignited a series of events that would cost the Gores three years of their lives and approximately $450,000 in nonrefundable legal fees.

The city of Freeport, it turns out, wanted the Gores' property for a proposed marina. The marina project would transfer a few pieces of private property, including the Gores', to a private developer. The remainder of the story is a rollercoaster ride of events that led to numerous lawsuits, including an eminent domain case between the city of Freeport and the Gore family. (SPOILER ALERT:) The Gores won the lawsuit, allowing them to keep their property.

The legal battles continue, however. One of the individuals who might have gained from the taking is suing several people for defamation: Main, her publisher, the author of a blurb on the book's back cover, and a journalist who reviewed the book. Main and Encounter Books are being defended by the Institute for Justice, which also represented Susette Kelo in her famous lawsuit.

The Gores' story is only one of many instances of eminent domain abuse. On the bright side, many states have passed legislation, including Michigan's Proposal 4 of 2006, to protect people's property rights and help counterbalance the Kelo decision. But like the Gores, too many property owners who resist abuse of eminent domain find they are defending an inconvenient right.