Ain't that America, home of the free? 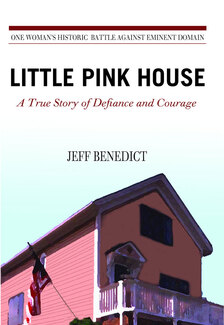 LITTLE PINK HOUSE:
A TRUE STORY OF DEFIANCE AND COURAGE

THE U.S. SUPREME Court's infamous 2005 decision in the case of Kelo v. New London, Conn., sparked outrage throughout the country. The skeletal facts of the eminent domain story are well-known: The city of New London attempted to seize the homes of Susette Kelo and others in the city's Fort Trumbull neighborhood to provide the property to private developers. Kelo lost her case in a bitterly contested 5-4 decision and eventually compromised with the city by moving her house to a donated parcel of land. The site once containing her home and the homes of many others was never developed, and it is currently a barren wasteland.

Less known, however, are the identities of the real heroes and villains of the story — an oversight remedied by Jeff Benedict's "Little Pink House: A True Story of Defiance and Courage." Benedict masterfully employs a straightforward narrative technique that masks the hundreds of interviews and hours of research he conducted to reconstruct the 10-year struggle between, on the one side, the city, the New London Development Corporation and Connecticut politicians, and, on the other side, Kelo, her neighbors, the press and the Institute for Justice. The result is a compelling drama played out by characters alternately motivated by good intentions, overblown egos, malice and goodwill.

While the outcome of the Kelo case inspired a shelf of books on property rights, "Little Pink House" is the first to document the human side of the story — the residents' anxiety, grief and resignation as they waged a losing battle to keep their homes. Benedict depicts the difficulties faced by the Kelo plaintiffs as they attempted to navigate the legal waters of eminent domain and maintain jobs, relationships and their daily routines, while being denied the peace of mind that comes from knowing they wouldn't be forcibly evicted from their homes at any moment.

Benedict keeps the story moving forward by humanizing both the protagonists and their antagonists, explaining complex legal issues in easily understood prose that conveys the shock of a grave injustice without blatant editorializing. The result is an engrossing book that should be required reading for all civics and government courses.