The extraordinary profits that can be made in trafficking illegal cigarettes have led to brazen attempts to steal them. Consider the following three examples.

An audit of the cage contents indicated that the thieves made off with everything from more than 180 cartons of cigarettes to wintergreen-flavored Skoal chewing tobacco and a single carton of Zig Zag papers.[132]

The tobacco cage at Sam's Club in Port Huron is now kept in safe sight of store cashiers and other employees, as is evident from this photo. 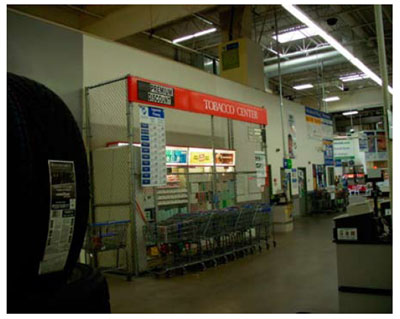 Retail theft is not the only concern that law enforcement officials and businesspeople have. Wholesalers are often targets too. In October 2004, for instance, a semi-trailer of cigarettes was hijacked in Washtenaw County. The driver of the trailer was blindfolded and pistol-whipped during the ordeal but survived.[135] Arrests were made in this case in 2008.[136]

Martin & Snyder Product Sales, the only remaining cigarette wholesaler in the city of Detroit, has on more than one occasion been robbed by thieves who spent a night with a sledge hammer breaking through the brick wall of the company's warehouse (see Graphic 19). The wall in question is also surrounded by a high perimeter fence and is well-lit, according to George Daiza, co-owner of the company. 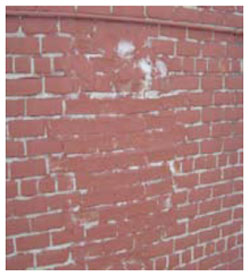 Daiza began working for the company in the early 1980s.[137] He says that while the wholesaler has long faced troubles associated with local criminal activity, it was not until 1994, when cigarette taxes jumped from 25 cents per pack to 75 cents per pack, that the expense and danger surrounding his work as a tobacco wholesaler escalated dramatically.[138]

According to Daiza, in 2005 two of M&S's trucks on separate occasions were hijacked in the Detroit metropolitan area, and the drivers were held at gunpoint and then left tied up. The regular drivers approached Daiza and the other owners and expressed their fear of working in an environment in which the cargo they hauled might lead to injury or death. Martin & Snyder responded by hiring the Threat Management Group, a security team that protected wholesaler's drivers and cargo.[139]

Consider Daiza's description of the lengths M&S and TMG went to in order to ensure the safety of M&S employees and property.[140] Before deliveries were dispatched, as many as 12 armed security guards — and sometimes a trained dog — maintained a clear and obvious presence by milling around in the M&S parking lot. The purpose was to send a message to anyone reconnoitering the compound and its delivery traffic. Up to six Martin & Snyder trucks are sometimes sent out at once, including an empty decoy truck with a single driver.[141]

The other trucks with real shipments carried armed TMG guards and were followed by a TMG vehicle with an armed guard and a camera that would broadcast live video over the Internet for Martin & Snyder owners to watch from the confines of their office.[142]

Once the convoy reached a certain point in the city, each of the trucks broke in different directions and drove to their destinations, which could include deliveries as far north as Saginaw and as far south as Ohio. Moreover, delivery schedules were changed frequently, so that would-be hijackers would never catch the trucks on a fixed schedule.[143]