Michigan From 1990 to the Present

The magnitude of Michigan's smuggling problems changed with the passage of Proposal A in 1994. This referendum shifted school funding away from local property taxes, partially replacing them with a package of increases in statewide consumption taxes.[97] Included in this package was a tripling of the state cigarette tax from 25 cents to 75 cents per pack, making Michigan's the highest rate in the nation at the time.

The degree of casual cigarette smuggling — shopping just over the Michigan border — appeared to leap immediately. In the state's 1996 "Final Report of the Senate Finance Sub-Committee to Combat Cigarette Smuggling in Michigan" it was noted that in mid-1994,[1] the MSP conducted surveillance at just four party stores on I-69 inside Indiana and counted people from 180 Michigan-plated vehicles buying cigarettes in just four hours' time.[98]

By raising the state's cigarette tax by 50 cents per pack, Proposal A enabled smugglers to drive away with as much as $150,000 in excise taxes on every tractor-trailer load of cigarettes smuggled into the state — $214,000 in 2008 dollars. Commercial smuggling exploded. Over the next four years, tax-paid sales began dropping, though under the new tax rate — triple the previous level — the state still raised more total revenue than it did under the previous rate.

One of the unintended consequences of the increase involved helping the "Party of God," popularly known as Hezbollah, an officially designated terrorist organization. The group had links to a cigarette smuggling ring operating in the Great Lake State.[99]

The first public indictment involved two primary operatives working out of North Carolina, but they worked with contacts in Michigan who have also been accused of trafficking in illicit cigarettes and tax stamps (now required for the legal sale of cigarettes in Michigan), and for illegally supporting a terrorist organization. These accomplices were charged in separate indictments.

The two North Carolina men, Mohamad Hammoud and Mohamad Harb (pictured in Graphic 12), would purchase vanloads of cigarettes taxed at 5 cents per pack and drive them to Michigan, where taxes on each pack were (then) 75 cents per pack. The men would capture as profit the difference between what they paid and what they sold them for, less their travel expenses. According to the federal government, each trip would produce net profits of between $3,000 and $10,000. Graphic 13 shows Hammoud with some of the profits from his smuggling.[100] 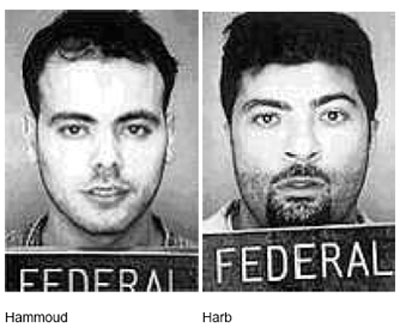 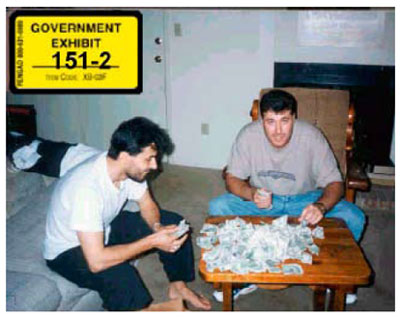 Source: "Tobacco and Terror: How Cigarette Smuggling is Funding our Enemies Abroad," report by U.S. House Committee on Homeland Security, 2008.

Hammoud and at least one of the other accomplices in the smuggling ring had connections with Lebanon's Hezbollah, which is also thought to have connections with Al Qaeda.[101] The Federal Bureau of Investigation believes that profits from the smuggling operation were sent to Hezbollah in the form of cash and equipment that included the following:

Graphic 14: Mohamad Hammoud as a Young Man in Lebanon 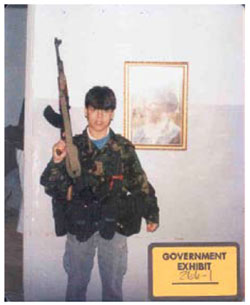 Source: "Tobacco and Terror: How Cigarette Smuggling is Funding our Enemies Abroad," report by U.S. House Committee on Homeland Security, 2008.

After the Mackinac Center, a Michigan-based free-market think tank, distributed an essay that helped publicize this case in Michigan, state Sen. Joel Gougeon remarked in a WNEM Channel 5 broadcast on Aug. 15, 2002, that terrorism had not even been discussed as an issue before passing the 2002 tax hike. He added, "I acknowledge that we're making that law enforcement issue more difficult, but offsetting that is our need in the budget. ..."

One of Mohamad Hammoud's Michigan contacts was Dearborn resident Hassan Moussa Makki. In 2003, Makki admitted to giving "material support to Hezbollah" and was sentenced to more than four years in prison. Makki has been described in court paperwork as a conduit for contraband cigarettes that were part of the "Charlotte Hezbollah Cell," in which Mohamad Hammoud played a leadership role.[103]

A Detroit Free Press article about the case indicated that Makki had smuggled between $38,000 and $72,000 worth of cigarettes to Michigan once a month for two years and personally gave more than $2,000 to the "orphans and martyrs" program of Hezbollah.[104] Makki (see below) actually placed what he called a "resistance tax"[105] on top of his sale of illicit cartons of cigarettes, apparently ensuring customers that the money would be redirected to Hezbollah. Moreover, Makki "maintained literal and figurative containers where Hezbollah donations would be set aside for transfer to Lebanon."[106]

Makki's indictment also revealed that he was arrested in West Virginia in 1996 with nearly 2,400 cartons of cigarettes, but by 1999 he was apparently delivering illicit cigarettes to accomplices in Michigan who were to affix counterfeit cigarette tax stamps.[107] Makki's 1996 arrest occurred after he was pulled over for speeding and for having "a defective windshield"[108] in the van he was driving. This arrest also turned up $2,571 in cash that had been intended for cigarette purchases.[109] At the time of his arrest Makki told his arresting officer that he was returning from Florida, where he purchased clothes for resale in Michigan.[110]

As Makki's story indicates, being arrested does not appear to be much of a deterrent for cigarette smugglers. This is probably not the only instance of smugglers making their way into and back out of the hands of law enforcement officials only to return to their previous line of work.

It is worth noting here that in Michigan two men have twice been convicted of violating the Michigan Tobacco Products Tax Act between July 1, 2004, and Aug. 14, 2008. One of these men, a store owner, was investigated four times in 2004 and 2005. The first three incidents, all in 2004, resulted in seizures of tobacco products that did not have corresponding invoices and that the Michigan State Police believed were bought from unlicensed sources. The 2005 inspection of the man's Eastpointe store resulted in confiscation of 56 cartons of cigarettes that were not supported by proper invoices.[*]

In December 2007, a confidential informant for the state of New York told Republican congressional staffers with the U.S. House Committee on Homeland Security:

Tobacco smugglers' only fear is losing a load of cigarettes. We do not fear law enforcement. They will pull us over, seize the load, and maybe we get arrested; but most likely we do not. Worst case scenario, we go to jail for a couple of months before returning to the smuggling again. Think about it. A small fish like me can make $50,000 a month working only a few hours each week. The big fish make hundreds of thousands a week, most of which goes to the Middle East in cash or trade transactions.[1111]

Currently before Federal District Judge Gerald E. Rosen is a case involving an alleged member of a group of Michigan-based operators who helped distribute cigarettes brought in from other states between 1996 and 2002. The defendant is accused of violating the Racketeer Influenced and Corrupt Organizations Act,[†] and the prosecution suggests the defendant worked closely with Hassan Makki in the contraband cigarette trade, although Makki is not named as a defendant in this particular case.[112]

Members of the gang allegedly leapt into the counterfeit stamping business after the passage of Michigan's 1998 law requiring tax stamps. The members are also accused of working "to obtain, produce and/or distribute millions of counterfeit state cigarette stamps" for California, New York and Illinois.[113]

So much trafficking exists for the express purpose of financing terrorist organizations alone that representative Peter T. King (R-N.Y.) asked the Republican Staff on the U.S. House Committee on Homeland Security to produce a report on the subject. In April 2008 they released "Tobacco and Terror: How Cigarette Smuggling is Funding our Enemies Abroad."

In the report, staffers conclude that in "just two months of illicit cigarette trade operations, a motivated terrorist cell could generate sufficient funds to carry out another September 11 style attack, in which operational costs were estimated to be $500,000."[114] Interstate trafficking in cigarette and smokeless tobacco products led New York State congressman Anthony Weiner to introduce federal legislation last year to help minimize the trafficking.

On Sept. 10, 2008, Weiner's legislation, known as Prevent All Cigarette Trafficking Act, passed the U.S. House of Representatives. The legislation mandates a number of tighter controls along the supply chain and dramatically increases penalties for violations of the Jenkins Act.[115]

The smuggling-terrorism link is just one in a long series of interesting, tobacco-related crimes being committed in Michigan, California, New Jersey and elsewhere. Often, however, large-scale smugglers have no ulterior motive; they are focused solely on making large sums of money.

For instance, on Nov. 13, 2008, law enforcement officers arrested 18 people in the metro Detroit area for "trafficking 104,300 cartons of illegal cigarettes worth more than $2 million in unpaid Michigan taxes," according to the Detroit Free Press. The two-year investigation that led to the arrests involved the federal Bureau of Alcohol, Tobacco and Firearms and more than 150 federal, state and Detroit law enforcement officers.[116]

In a similar case in September 2008, eight people were indicted in U.S. District Court in Detroit for peddling contraband cigarettes. The operation allegedly involved the purchase of more than $2 million in illicit cigarettes by the defendants for distribution. A Chicago Tribune story stated that some of the cigarettes had no tax stamps, while others had counterfeit stamps. According to the indictment, a portion of the cigarettes were sold from a party store in Detroit; the owner-operator of the business was also charged.[117]

[‡] In an interesting aside, this RICO case received a lot of media coverage when the story broke in 2004, because several of the defendants were charged with obtaining counterfeit Viagra, the drug famous for treating erectile dysfunction. Defendants were also charged with obtaining and transporting such stolen goods as Zig Zag papers for rolling cigarettes and "thousands of cartons of stolen R.J. Reynolds cigarettes from Kentucky." (See Criminal No. 03-80406, 13.)