Since first enacting a 3-cent tax per pack in 1948, New Jersey has raised the state tax 16 times. The state has greatly accelerated its pace of tax increases during the past decade, raising the rate four times in the last six years, from 80 cents per pack to $2.575 per pack.[154] In November 2008, New Jersey's state cigarette tax rate was the second highest in the nation.

As the New Jersey tax rate has risen, the number of legally taxed packs sold in New Jersey has dropped precipitously, and this correlation is strong throughout the history of New Jersey's tobacco tax (see Graphic 20). This trend has led the state to report that its tax increases have caused smoking to drop. There is evidence, however, that this decline is at least partly due to smokers' finding cigarettes that have escaped New Jersey taxes. 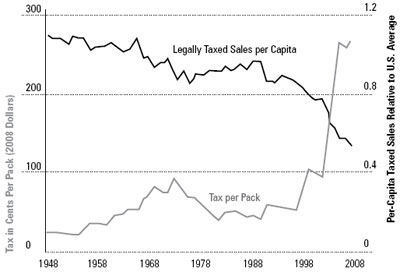