In Michigan, the 6 percent general state sales tax is imposed on top of the price of the cigarettes and the state and federal excise taxes ($2.00[28] per pack and $0.39[29] per pack respectively). Michigan's cigarette excise taxes have not always been so high. Michigan imposed its first tax on cigarettes in 1947 — 3 cents per pack — and has increased the tax nine times since then (see Graphic 10). The first big increase occurred in May 1994, when Proposal A, a ballot initiative, tripled the state's cigarette tax to 75 cents per pack, then the highest in the nation.[30] Michigan then increased its cigarette excise tax rate to $1.25 per pack in August 2002 and to $2.00 in July 2004, an increase of 167 percent in less than two years. 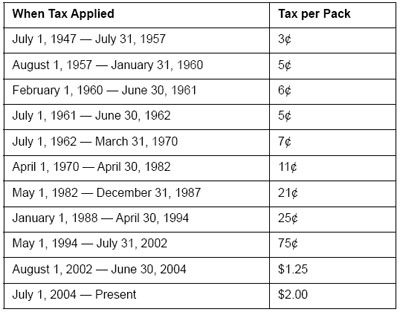 Michigan's cigarette tax is currently one of the highest in the nation. Since 1994, cigarette tax hikes have helped push the price of cigarettes in Michigan to more than $5.00 per pack, well above the price in most other states and countries. Together with federal cigarette taxes, which have increased from 34 cents per pack to 39 cents per pack since January 2000, the total taxes on a pack of Michigan cigarettes are now about as high as the cost of the cigarettes themselves.

[*] In other words, when a tax increase became effective midyear, we plotted the higher rate for that year.