Appendix B: Prohibition in Michigan and the Avenue de Booze

State and federal law used to prevent the sale of alcohol in Michigan. Currently, state law prevents the sale of cigarettes in Michigan unless the pack displays an expensive tax stamp. In both cases, smugglers have realized significant profits by meeting consumer demand, whether for alcohol or for low-cost cigarettes.

It is not surprising, then, that current cigarette smuggling recalls the era of alcohol Prohibition in the state. Michigan has often been a leader in economic and social experiments in America, and this includes being the first to go "dry."[*] In a statewide referendum in 1916, the people of Michigan chose to prohibit the sale of alcoholic beverages.

Michigan did not embrace Prohibition all at once. Advocates[†] faced stiff opposition from saloon owners, brewers, other special interests and many residents in the late 19th and early 20th century. This began to change, however, with public sermons against liquor consumption by the high-profile Rev. Billy Sunday. Dry counties began popping up in Michigan starting in 1907 with Van Buren County, according to the Michigan Anti-Saloon League. By 1911, 39 Michigan counties had adopted local prohibitions on alcohol.[219]

The work of churches and the Michigan Anti-Saloon League also played a significant role in turning opinion against saloons, breweries and consumption of "spirits." The proponents' language was uncompromising. In January 1912, the Michigan Anti Saloon League's superintendent wrote:

The Anti-Saloon League of Michigan is commissioned of the church and all the forces of righteousness of the State to wage a ceaseless warfare for the banishment of the saloons and breweries of the state.[220]

In the March 11, 1911, edition of The American Issue, the Michigan Catholic, a periodical, is quoted as opining:


In effect, alcohol was seen as a "gateway drug" that led to stunted growth and poor health.

Michigan Gov. Chase Osborn was particularly opposed to brewery-owned saloons. On Jan. 31, 1912, he declared: "This brewery domination with all of its tentacles is a monstrous hyena in our social system. I have been near enough once to spear it and it squirmed. No greater menace has confronted the country since the days of human slavery."[222]

Ultimately, public opinion shifted even further, and in 1916, Michigan voters approved a statewide prohibition of the sale of intoxicants, including beer, wine and liquor. The law took effect in 1918.[223]

Many citizens responded by making their own liquor or beer. The grandfather and great grandfather of one of the authors cheerfully undermined prohibition in Detroit by selling from the family's dry good store much of what a budding distiller needed to brew spirits.

Home production of liquor was difficult, though, and often produced noxious odors and other problems. This left many of the state's drinkers — "wets" — needing to find a new source of alcohol. That source became Ohio. Toledo is not far from the border of Michigan, and the city became a ready source of every intoxicant for those willing to transport, consume or sell it back into Michigan.[224]

By all accounts, there was no shortage of people willing to do so. Before federal prohibition was adopted, so much illegal booze was flowing into the Great Lakes State from Ohio that U.S. 25 — Dixie Highway — in Monroe County earned the nickname "Avenue de Booze."[‡], [225]

When national prohibition took effect in 1920, Michigan became a battleground state in government's attempt to thwart illicit trafficking and consumption of alcohol. Because of the state's early experience with alcohol prohibition, many in Michigan were already skilled in the production, acquisition and cross-border transport of large quantities of illegal liquor.

Alcohol from Canada arrived in Michigan by every means imaginable — not just planes, trains, automobiles, trucks and boats, but also underwater sleds[226] (Graphic 25) and at least one funeral hearse.[227] During the summer, every sort of marine craft worked the mile of river separating Michigan and Ontario, either hauling whiskey from Canada or trying to prevent it.[228] During the winter, ice skiffs (essentially sailboats mounted on long running blades) plied the frozen portions of the Detroit River.

One enterprising mechanic built a split gas tank that could be filled half with gas and half with liquor.[229] Women were known to strap large canisters of alcohol to their legs and then cover them with their dress and full-length coats.[230] The term "bootlegger" was coined to describe those who would conceal alcohol in long boots. 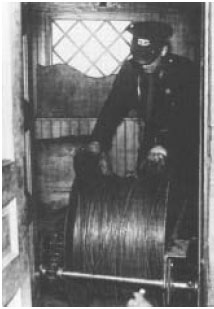 Source: Detroit Free Press. The sleds were dragged underwater by cables running across the Detroit River from Ontario to Michigan.

When large shipments of alcohol entered Michigan from Canada, they were frequently broken down into smaller parcels and resold. Some went directly to homes or street corners for personal use, while others went to "blind pigs" — any place selling illicit alcohol (Detroit alone was reputed to have 25,000 of them at one time[231]).

Anything that could conceivably be used to conceal the transport of smaller quantities of alcohol seemingly was. In the book "Rum Running and the Roaring Twenties," a series of photos actually shows such smuggling devices as:


Graphic 25: A Biplane Smuggling Alcohol on the Ice 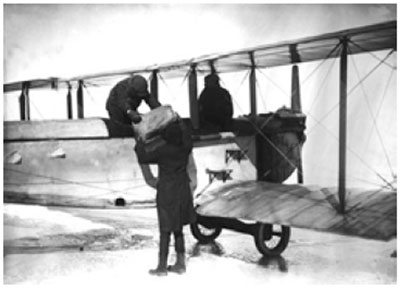 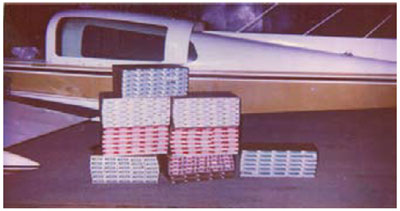 Organized crime played a significant role in the acquisition, transportation and sale of alcohol in the country and in Michigan. The state's notorious "Purple Gang" — a predatory syndicate of bootleggers and hijackers — protected its turf with a vengeance. They are reputed to have killed hundreds of people in bootlegging disputes.

With all of this activity, it's not surprising that Michigan was considered a major smuggling hub. Writing in The Detroit News in 1999, News Librarian Jenny Nolan states that more than 75 percent of the alcohol entering the United States during Prohibition came across the Detroit River.[234] In his book "Intemperance: The Lost War Against Liquor," author Larry Engelmann reports that the federal government was dedicating up to 27 percent of its entire Prohibition enforcement budget on fighting illegal alcohol commerce in Michigan.[235]

[222] Michigan Anti-Saloon League, The Governor vs. The Liquor Traffic pamphlet. Detroit, circa 1912.

[234] "How Prohibition made Detroit a bootlegger's dream town."

[*] Hudsonville in Michigan's Ottawa County repealed its dry law only in November 2007. It was the last community in Michigan to retain such a law, which was removed from the books in hopes of facilitating economic growth. This rationale is ironic, since some dry advocates originally argued that prohibiting saloons and alcohol would improve business productivity. (See "Intemperance: The Lost War Against Liquor," James Engelmann (The Free Press: 1979), 12-13. Engelmann quotes historian James Timberlake as saying, "[E]conomic developments were conspiring to give the economic argument for temperance a boost." With the growth of mass production at the turn of the century, a new ethos of scientific and industrial efficiency birthed a cultural argument against inebriation.)

[†] The city of Temperance in Monroe County is so named for its creation by a series of deed restrictions or "temperance clauses" on land sold by temperance advocates Lewis and Marietta Anstead. These clauses that prohibited the sale or manufacture of intoxicants on land they sold (Source: Michigan Place Names, Walter Romig, Grosse Pointe, 1973. 55. See also "Bedford Township, Monroe County, Michigan: Then and Now," 2003.)

[‡] Today, Interstate 75 parallels U.S. 25 as it runs north into Michigan. Given the volume of traffic that I-75 carries from the South and the prevalence of smuggling in Michigan, the highway is probably a modern-day "Avenue de Smokes."