A County-Level Analysis of Wholesaler Shipments

In addition to the state-level model estimated above, we wanted to conduct a county-level analysis of cigarette smuggling for the state of Michigan in an effort to better describe the occurrence of casual smuggling. County-level data of this nature is often difficult to obtain. We were fortunate to obtain, from a large Midwest cigarette distributor, monthly counts of cigarettes shipped to retailers located by zip code, which were then summed to the county-level. The sample covers the time period beginning January of 2006 and ending September 2008. We have agreed to withhold the name of the participating distributor for privacy purposes. The use of data from a single wholesaler clearly poses some limitations on the implications of the results. However, we present this model as an additional robustness check of our conclusions regarding the occurrence of casual smuggling.

Slemrod (2007) conducts a similar study of cigarette sales for the state of Michigan covering the sample period November 1991 to September 2006. Data for the Slemrod (2007) study was obtained from the Michigan Department of Treasury.
A primary conclusion of the Slemrod paper is that the responsiveness of smuggling to changes in the tax rate are much lower after the imposition of the stamping requirement in Michigan, which took effect in April 1998.

Ohio's tax remained steady at 125 cents per pack over the sample period. Given that Michigan's tax rate exceeds that of each of its bordering states, those Michigan counties along the borders should experience fewer shipments of cigarettes from our distributor as the residents of these counties can easily shop across the border where prices are lower. Furthermore, those Michigan counties along the Indiana and Wisconsin borders would be expected to observe an increase in in-state sales after the two above-mentioned tax increases, since the benefits of cross-border shopping were reduced.

Our regression model for this county-level study resembles a more traditional demand function. We regress the natural log of per capita county shipments against real price (in 2007 dollars), the real tax rates in Indiana and Wisconsin, binary variables for each neighboring state equal to one if the county borders said state, interaction terms between the Wisconsin and Indiana tax rates and the corresponding binary border variables, a binary variable equal to one if the county contains a Canadian border crossing, and two additional binary variables indicating whether the county is within 50 miles of an Indian reservation or military base. Following from Slemrod (2007), we also estimated a specification in which we allow for changes in inventories for the three months leading up to and after the tax changes in Indiana and Wisconsin.

The estimation results of this model can be found in Table 6. Columns 1 and 2 present the results of the specification without allowance for inventory changes while the results of Columns 3 and 4 are those including the inventory variables. Considering the results of Columns 1 and 2, it can be seen that only the Wisconsin tax variable and the Wisconsin border and Canadian border crossing dummy variables are statistically insignificant. While the coefficients of some variables (such as the Ohio border variable) are of the "wrong" sign, the estimation results in regards to the tax variables perform as would be expected. 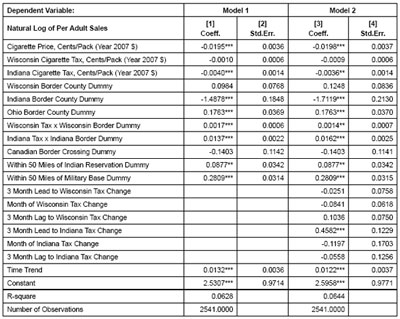 Evaluating the model at the point of means (except for the tax rates), we estimate that the July 2007 tax hike in Indiana increased shipments from our participating distributor to Michigan counties along the Indiana border by 53.2 percent, implying a tax elasticity of 0.67. Furthermore, the tax increase in Wisconsin led to an 8 percent increase in shipments to Michigan counties along the Wisconsin border, with a tax elasticity of a mere 0.06.

Specifically, in the three months leading up to the Indiana tax hike, shipments from our distributor to retailers in Michigan counties along the Indiana border increase by 58 percent in an effort to increase store inventories needed to support the impending increase in sales after the tax hike in the adjacent state. Such a finding is generally consistent with that of Slemrod (2007) and suggests that the influences of casual smuggling and the responsiveness to tax changes are strong and well understood by retailers.