Tax stamps were first mandated in Michigan by the passage of Public Act 187 of 1997. The act took effect on Dec. 30, 1997, but key provisions did not commence  until September 1998.[118] The law provided an outline for the delivery of stamps to tobacco wholesalers and others, along with such mandates as where the stamp should be placed on the cigarette pack (see Graphic 15); what percentage of the stamp must remain affixed (more than 50 percent)[*] to remain legitimate and a number of remedies - including imprisonment and financial penalties - for violating the law.[119] Stamp counterfeiting is punishable by imprisonment for one to 10 years and a financial fine of as much as $50,000.[120]

Graphic 15: Michigan Tax Stamps on a Pack of Cigarettes 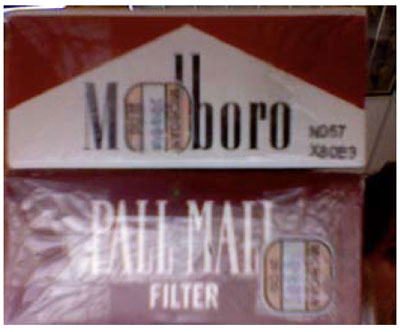 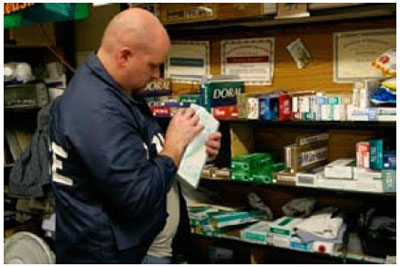 Michigan began using tax stamps to thwart smuggling later than did New Jersey and California, which adopted the stamps in 1948 and 1961, respectively. At the time of enacting Michigan's first cigarette tax in 1947, tax stamps were considered, but ultimately rejected as too expensive. The tax stamp idea was again advanced in the 1950s to help combat contraband trafficking, but the stamps were never adopted. [122]

The 1997 tax stamp law had a clear impact on legitimate tax-paid sales of cigarettes. Just a quick review of the data indicates that in the 12 months leading up to the full tax stamp-related regulations, there were 719,296 packs sold legally in the state. In the 12 months after full implementation, there were 808,968 packs sold legally, an increase of 12.5 percent.[†]

It needs to be said that linking the simple observation of increased tobacco revenues to state tax stamps can lead to spurious conclusions. It is possible that cigarette hoarding was taking place before the stamps went into effect, that a sudden increase occurred in the popularity of other tobacco products, that manufacturers had raised their price or that some other unseen factors may have biased sales numbers higher.

In a study not yet released, University of Michigan economist Joel Slemrod finds that stamping cigarettes in Michigan did indeed have an impact on tax-paid sales and thus on revenue flowing into state coffers.[123] It is perhaps the effectiveness of tax stamps that have led to both the theft and the counterfeiting of state tax stamps. Following are a few anecdotes of counterfeiting and theft provided to one of the authors by the Michigan State Police in 2004 and 2008, respectively.

In a 2004 e-mail to one of the authors, a Michigan State Police spokesperson[124] wrote that the MSP received about 100 different complaints concerning counterfeit stamps in 1999, the year after the state tax stamp law took effect. Also according to the State Police:


In response to a Freedom of Information Act request, State Police report that they "could not find any counterfeit complaints for the years 2002, 2003, and 2004."[‡] The 2005 data provided under the FOIA included two original reports of cigarettes with counterfeit stamps and a dozen supplemental reports of other counterfeiting activities. In one incident that occurred in August 2005, the State Police conducted a surveillance operation at a private residence. According to the police report, the operation resulted in the confiscation of 210 cartons of cigarettes with counterfeit stamps from a single van. The police also reported investigating the house and garage and finding glue guns, scissors, "approximately 2,854 counterfeit stamps" and nine additional half-cases of cigarettes that were apparently waiting to be stamped.[126]

By 2006, the MSP was receiving more complaints about counterfeit tax stamps, and in 2007 and 2008, the department took 30 complaints of counterfeit stamps, which resulted in the seizing of more than 3,000 cartons of cigarettes.[127] For example:

In a June 2006 inspection of a market in Taylor, almost 200 cartons and 767 packs of cigarettes were seized for having counterfeit stamps. Nine boxes of cigars were also confiscated. According to the police report, the store owner admitted that he bought the cigars and some other tobacco products "from an unknown lady who lives off of Schoenherr."[128]

Police seized 42 packs of cigarettes with counterfeit stamps from a Detroit-area dollar store in November 2007. The store owner claimed that the cigarettes were purchased by the previous owner of the store.[129]

Other incidents may have occurred that are not included in the MSP reports. Other Michigan law enforcement agencies can also seize illegal tobacco products, and arrests for Michigan-related cigarette smuggling may been made outside the state during this time.

[*] The percentage is scheduled to be increased "in the near future," according to the Michigan Department of Treasury. The new stamps will also be larger and contain a 10-digit indicia, as opposed to the current five-digit indicia, in hopes of improving law enforcement efforts. (See Michigan Department of Treasury, "Special Notice to Wholesalers, Secondary Wholesalers, Unclassified Acquirers of Cigarettes and Vending Machine Operators, August 28, 2008.")