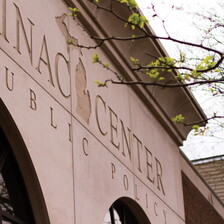 One of the ways you make your voice heard is through the charitable organizations you support, like the Mackinac Center. Being able to support causes that you believe in — privately — has been a cherished principle in our country since its beginning.

But today we often hear the term “dark money” used to cast a cloud over the right to private giving and donor privacy. During the recent congressional hearings on Amy Coney Barrett’s nomination to the U.S. Supreme Court, Sen. Sheldon Whitehouse, D-Rhode Island, tried to disparage the Mackinac Center and others for our successful legal efforts to free workers from forced unionism.

“You have a whole array of legal groups … funded by dark money,” Whitehouse said, pointing to a list naming the Mackinac Center and other free-market groups. Later he said that Mackinac and others are “showing up in court to tell the judges what to do.”

Sen. Whitehouse meant it as a criticism, but we take it as a compliment.

We are proud that the amicus brief we submitted to the U.S. Supreme Court in the Janus v. AFSCME worker freedom case was cited by the justices in their ruling. We are grateful to have donors who saw how important this case was and chose to support our legal team.

Critics of private philanthropy want to force you to publicly disclose your charitable giving by reporting your name, address and gift information to the government. Imagine if this information became available in a government database online, so that opponents of free markets or constitutional principles could target specific individuals or single them out for harassment.

During the civil rights era, the Supreme Court ruled that private groups cannot be forced to turn over their supporter list. The court knew what would happen to supporters of groups like the NAACP: Their businesses would be boycotted, and they would be targeted for harassment and intimidation, or even violence, stalling progress for civil rights.

The Mackinac Center is committed to protecting donor privacy to the full extent allowed by law and challenging any efforts to expand government intrusion into private giving. To invade people’s privacy and chill their participation in public life is not the way our democracy should operate.