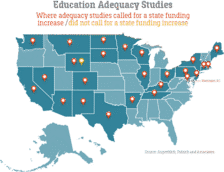 Common wisdom holds that the key to improving Michigan schools is to open up the state’s pocketbook. As attractive as that idea may be — you get what you pay for, right? — our new study shows that it isn’t necessarily true.

Over the past dozen years, Michigan is the only state to have lost ground on the nation’s report card. Our state’s fourth- and eighth-graders rank 43rd overall in important math and reading skills. The current trajectory doesn’t bode well for preparing today’s students to be tomorrow’s productive citizens and economic contributors.

The State Board of Education and state superintendent have a lofty goal of moving Michigan from the bottom 10 to the top 10 in educational achievement within a decade. The education establishment will be tempted to turn the conversation toward spending more tax dollars to provide more resources to schools.

The problem: The reasoning that “if we just had some more money” doesn’t pass the empirical test, as a new Mackinac Center analysis points out. Investing hope and large sums of other people’s money into a statewide funding increase represents not only an act of faith; it’s also a diversion from harder conversations about how to raise the bar.

The stage has been set for talk of Michigan K-12 funding increases with the imminent publication of an official “Education Finance Study,” better known as an “adequacy study.” As part of a broader December 2014 tax deal, the Michigan Legislature agreed to dedicate state funds to this purpose. The experienced Colorado-based firm Augenblick, Palaich and Associates (APA) won a $399,000 contract to perform the research.

The mystery is not so much whether APA will recommend a funding increase, but exactly how large the suggested tab will be. APA identified 39 adequacy studies conducted between 2003 and 2014, including 13 of its own. Only one of the 39, and none of APA’s studies, failed to call for a funding increase.

A state statute specifically spells out that the study was to be completed and turned in by March 31, 2016. But the Michigan Department of Technology, Management and Budget granted an extension, claiming responsibility for an error in data transmission that didn’t gain any attention until the eleventh hour. It set a new deadline of May 13, but sent the study back to APA, saying it needed more clarification. The study is now expected on June 24.

According to terms outlined in the official contract, APA is supposed to identify districts that top the state average in the share of high school students who pass the Michigan Merit Examination. Then, breaking those “successful” districts into categories of like demographics, the report’s authors are to recommend how much money all the unsuccessful districts need to reach proficiency.

The fundamental problem with this type of analysis is that many lower-funded districts outperform their higher-funded counterparts.

The other common approach of adequacy studies, called the professional judgment model, asks groups of education officials to discern how much money they believe is needed to attain a specified performance level. Studies using this method called for a 35 percent funding increase in Connecticut and a 22 percent hike in Washington, D.C., both areas that were already among the nation’s highest in per pupil spending.

However, Stanford University’s Eric Hanushek has pointed out that “there is no evidence to suggest that the methodology used in any of the existing costing-out approaches” can tell us the funding level needed to reach a certain achievement goal.

A big unproven assumption like the one being made in Michigan’s pending adequacy study deserves to be tested. Having obtained years of detailed data from the Michigan Department of Education, the Mackinac Center took on the task of studying the track record of past spending patterns to predict future results. We examined detailed spending histories, student demographics and test scores from more than 4,000 Michigan public schools.

Establishing our own Colorado partnership, we worked with Edward Hoang, an economics professor at the University of Colorado-Colorado Springs, to test how the addition of inputs (spending) affected multiple outputs. In all, 28 academic indicators were available to measure the effects of more spending. These included MEAP subject tests for third through eighth-graders, ACT and MME subject tests for high schoolers plus three different measurements of graduation rates.

Our study’s title sets forth the question, “School Spending and Student Achievement in Michigan: What’s the Relationship?” The short answer is, “practically none.” Of the 28 different academic measures tested, 27 revealed no statistical connection.

The outlying indicator, seventh-grade math, estimated that a 10 percent funding boost would reap a mere .0574 point gain in average test scores. To put that in perspective, the state’s average seventh-grade MEAP score for 2013-14 (the last year it was used) was 725.

The findings of the Mackinac report would not surprise economists who have studied the question. Back in 1997, Hanushek compiled the results of all known studies comparing education spending and achievement. Two-thirds of the 163 estimates he looked at showed no statistically significant relationship while 7 percent actually indicated that more spending led to worse results.

Since that time, only a few studies have bucked the trend. Interestingly, most of these countervailing studies looked at the effects of Michigan’s Proposal A, a 1994 voter-approved rewrite of the state’s school funding system. Prop A substantially leveled funding disparities among districts. The lowest-funded districts received a big boost to their budgets, creating a natural before-and-after experiment for researchers to examine.

Two studies found that fourth- and seventh-grade students in the low-funded districts improved their MEAP scores slightly as a result, though no impact was found on their counterparts in higher-funded districts. By comparison, students across Michigan today are enrolled in relatively high-funded districts. (The average state per pupil expenditure tops $12,000.) Thus, the small positive findings in these earlier reports hold little relevance for today.

Some find it counterintuitive to hear that a rigorous analysis shows increased education spending won’t help improve student outcomes. It’s not that some amount of extra resources in the past never helped, or that future funding increases could never produce benefits. Rather, despite good intentions from many, the current system is not designed to make better use of more money.

The University of Washington’s Center on Reinventing Public Education conducted a thorough six-year analysis of the nation’s school finance systems, only to reach some unsettling conclusions. It reported that funding reinforces compliance with regulations instead of rewarding, or even being able to identify, productive uses of public dollars. Interest groups are organized to channel money into policies and practices that on the whole offer little or no benefit to students.

Additional dollars are most likely to follow past trends of hiring administrators, reducing class sizes, backfilling employee pensions or compensating teachers based on factors like seniority and academic credentials. The top-down governance and funding model provides precious little incentive to innovate and pursue excellence outside of traditional norms and practices.

A laudable ambitious goal has been set to improve results for Michigan students. Calling for more money to fix the problem is an easy answer that ignores recent history. It’s time for educators to try, and parents and taxpayers to demand, something drastically different.