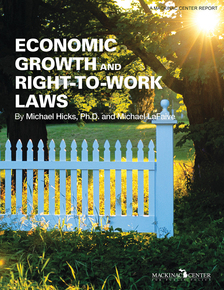 The Mackinac Center's 2013 study, “Economic Growth and Right-to-Work Laws,” has been well received. It examines the impact of right-to-work laws in 48 states over 64 years. Its technical work was recently extended and published in the Cato Journal, an academic, peer-reviewed publication.

Mackinac Center for Public Policy scholars found in 2013 that from 1947 through 2011, states with right-to-work laws saw their average inflation adjusted income grow 0.8 percentage points each year. That sounds puny, but it is not. A growth rate of 2.8 percentage points versus just 2 represents a difference of 40 percent. The authors also divvied up the impact of right-to-work laws into time periods (1947-1970; 1971-1990; and 1991-2011) and generally found positive results in each period.

Authors Michael Hicks, Srikant Devaraj and Michael LaFaive have since extended the statistical model in a way that clarifies the effects of right-to-work on a state’s population growth.

Their new model found that the presence of right-to-work laws had a “statistically significant influence on population growth,” particularly from 1971-1990. During that time, right-to-work had an impact of 1.5 percent each year.

The Center works to create the best scholarship in the state. Publication in academic journals provides evidence that it produces scholarship that merits recognition at the national level as well.