But Not All Schools Want to Advertise Their Programs 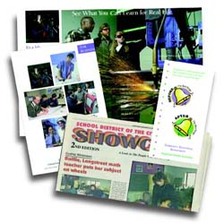 Public schools now market themseves through radio, billboards, newspaper ads, and promotional literature such as that shown above from the Saginaw school district.

Schools need students, and as families are empowered with greater educational choices, many public schools and school districts are turning to private marketing firms to attract students.

School administrators have found that the advent of charter schools and the public schools-of-choice program, as well as the increased demand for private schools, have created a competitive education environment and an increased need for marketing.

Some school districts, like Parchment in the Kalamazoo area, have chosen not to get involved in costly "high stakes (advertising) campaigns." Superintendent Craig Misner told the Kalamazoo Gazette that, "We have other things to do with our finances."

Yet other districts are more than willing to expend money on marketing to attract new students which mean "new" money.

The Barkholtz Group is not new to public school marketing. In fact, neither is the idea new to the Saginaw district. The firm and district have partnered together since the 1980s.

"Historically, marketing was especially important when trying to pass a millage because many of the voters were retired and did not realize what the schools did for the community," says Shriner. However, prior to the 1990s there was little competition for students and therefore little use for marketing firms in public schools.

According to Lawrie Drysdale, author of The Evolution of Marketing: Implications for Schools, the roll of the marketer has changed over the years. "Marketers have become change agents who explore the environment for new opportunities on which their organizations can capitalize by creating innovative products and services," she says.

Today, marketers help schools develop campaigns that find out what school programs are needed, as well as increase community awareness of these programs. Sometimes firms resort to unusual techniques, like sending videos to students who might otherwise not know about a program. Such efforts by The Barkholtz Group have helped to increase enrollment in programs like the Saginaw Career Complex, which provides juniors and seniors with 24 vocational and technical programs as an alternative to traditional high school coursework.

According to Michael Manley, director of information services at Saginaw City Schools, the reason for such aggressive marketing efforts is the competition for students from charter and private schools.

"What we have found is that school districts are reluctant to give up their students because they will lose money from the state, so we have to work harder to get students," says Manley. The use of a private marketing firm has saved a great deal of district time. While Manley and his assistants work on other in-house marketing strategies, he is able to more effectively get the word out about his district with the assistance of a private firm.

Saginaw has benefited from increased competition and its ability to raise community awareness and promote school programs. According to faculty member Sandy Diebold, the Career Complex has helped recruit students from other districts and has maintained enrollment of approximately 900 students. This increases the amount of money Saginaw receives from the state, as money follows students from other districts.

Increased marketing efforts by all Michigan school districts should be expected as educational opportunities for families continue to expand in Michigan. In July, the governor signed a bill which further reduced the barriers that prevent parents from choosing alternative public schools. In the fall, the legislature will consider a plan to increase the number of charter schools universities may authorize.