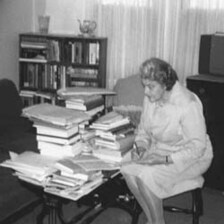 Detroit public schools fired teacher Dr. Anne Parks, above, in 1970 because of her refusal to financially support a labor union. The U.S. Supreme Court ultimately ruled that public school teachers could not be forced to pay for union political or ideological activities.

Dr. Anne Parks, a 43-year veteran teacher in Detroit's public schools and champion of teachers' rights, passed away in April. She was in her nineties.

A heroine for independent-minded teachers fighting for freedom from compulsory unionism, Dr. Parks resisted paying forced dues to a union she had chosen not to join for the last decade of her career.

Anne Parks was known for putting her students first. In 1967, she refused to take part in an illegal strike, asking union officials: "How can you expect students to respect the law and follow the rules when you stand out here openly breaking the law?"

She ultimately paid a high price for adhering to her convictions.

Despite her demonstrated concern for students, advanced degree, and long experience, Dr. Parks' livelihood was placed in jeopardy in 1969 when the Detroit Federation of Teachers (DFT) union secured an "agency shop" contract requiring teachers to pay union dues as a condition of employment.

Though she had served as an official in another union when membership and dues were voluntary, Dr. Parks refused to pay dues, explaining, "I object to the so-called 'agency shop' as a matter of principle."

The Detroit school system never concealed the fact that Dr. Parks was fired in 1970 solely because she acted on this belief.

With the assistance of the National Right to Work Foundation, Dr. Parks filed suit, and her dismissal was rescinded pending litigation. Eventually, the case brought by Dr. Parks and two other Detroit teachers made its way to the U. S. Supreme Court.

Moreover, the justices unanimously found in 1977's Abood v. Detroit Board of Education that public-sector employees could not be forced to contribute to union political or ideological activities.

In order to keep her job, Dr. Parks offered to pay union "fees" into an escrow account until Michigan courts determined how much she would be forced to pay. DFT officials refused, and she was terminated for good on March 10, 1978. Citing concern for the welfare of her students, Dr. Parks asked to stay on until the end of the school year. School officials denied the request.

Throughout the subsequent years of her retirement, Dr. Parks remained an active educator as well as a determined fighter against forced unionism.

Regarding participants in a National Right to Work college scholarship contest for which she served as a judge, Dr. Parks said a few years ago that she wanted to ensure "there would be no 'agency shop' districts left in the country by the time these children have children of their own."