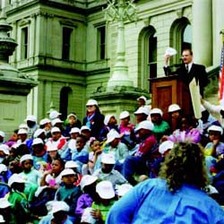 The debate over the benefits of school choice and more equal access to quality education may soon become more than an intellectual exercise for Michigan citizens.

In May, philanthropist Dick DeVos joined with leaders of Detroit's black community and others to announce the formation of Kids First! YES! (KFY), a campaign committee that plans to place a "local option" school choice amendment to Michigan's constitution on the November 2000 ballot. On July 30, the group submitted ballot language to the state for approval.

The KFY proposal would lift the ban against K-12 vouchers and tuition tax credits, but leave intact the prohibition against direct aid to nonpublic schools. The proposal would provide tuition vouchers for parents in the state's poorest-performing school districts to help them afford alternatives to their failing local public schools.

Opponents were quick to denounce the move. Members of the state's largest school employee union, the Michigan Education Association (MEA) called the proposal a "scam." Thom Houseman, vice-chairman of the MEA Republican Caucus, warned that "Educational apartheid is the sure outcome of vouchers. If members cannot comprehend or refuse to recognize the danger here, there will be swift and terrible outcomes."

But some citizens, such as James Collins of Farmington Hills, view opposition to vouchers as an attempt to maintain the status quo. "There is a powerful special-interest coalition that benefits greatly from the current system and will fight to protect it," Collins wrote in the Detroit Free Press. "Sadly, the losers are our children, especially those who are trapped with no alternative to deplorable inner-city public schools."

KFY officials say their proposal will "expand school choice where it is needed most, and where local voters approve it," noting that the school choice amendment would

More important than what the amendment creates is what it removes from Michigan'sconstitution, according to Mackinac Center for Public Policy Director of Education Policy Matthew Brouilette.

"The most important thing any school choice amendment does is remove the discriminatory language that specifically prohibits giving parents of K-12 students the same kinds of financial assistance and tax relief that both Michigan and the federal government already give parents of college and university students," Brouillette says.

Brouillette notes that the legislature could, following voter approval of the KFY proposal, pass a broader statewide school choice plan such as the UTTC, which reduces state taxes owed by parents or other individuals or businesses who pay K-12 tuition for a Michigan child.

Public schools need not fear a reduction in funding, says Brouillette. Both the UTTC and KFY plans would cap the level of financial aid or tax relief at roughly half the state's average per-pupil expenditure for public schools, generating a surplus in the state public school aid fund.

"Parents taking advantage of tuition vouchers or tax credits would be saying to the state, in effect, 'Give me half the money it costs you to educate my child and you keep the other half.' The state could then use the extra money to upgrade public school facilities," says Brouillette.

More information can be obtained at the Kids First YES! Website, www.KidsFirstYES.org .