Of the 500 school districts in Pennsylvania, 376 (75.2 percent) contract out for at least one of the major noninstructional services. This is the highest rate in this five-state survey. Twenty-four districts in Pennsylvania contract out for all three of the major noninstructional services, the second highest rate (4.8 percent) in the survey, behind Michigan (13.7 percent).

In 2015, 44.6 percent of Pennsylvania’s school districts contracted out for food service provision. This is higher than any other food contracting rate in our survey, but only 1.8 percentage points higher than Michigan.

The area where Pennsylvania stands alone among states is the rate at which it contracts out for school transportation services — 66.4 percent. That is the highest contracting rate of any service in any of the five states surveyed this year. Only Michigan’s custodial contracting rate comes close at 52.2 percent.

A unique aspect of school bus contracting in Pennsylvania is the large number of contractors available to and used by school districts. The Tuscarora School District in Franklin County, for example, contracts with 17 different private transportation providers. Many other districts have similar arrangements with a wide variety of private transportation firms.

The map below shows that contracting out for school support services is common in every region of Pennsylvania. 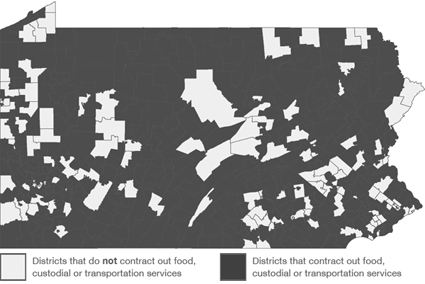