Ohio shows up on the opposite end of the contracting spectrum compared to Michigan and Pennsylvania. Its overall contracting rate is just 16.6 percent.[*] Only five districts (0.8 percent) in the Buckeye State contract out for all three major noninstructional services.

In 2015, 10.7 percent of Ohio’s 614 school districts contracted out for food service, the second lowest in our five-state survey — only Georgia had a lower rate. Just 4.2 percent of districts contracted out for custodial services, lower than the rate in Michigan in 2003. Transportation contracting was also low in Ohio at 6.5 percent, but two states in this survey (Georgia and Texas) had lower rates than this.

The map below of Ohio’s school districts provides a geographical perspective on the use of contracted services in the state. It appears that privatizing noninstructional services is more common in both the southwestern and northeastern regions, though these are not strong trends. Nearly every region of the state has at least some districts experimenting with contracting out for services. 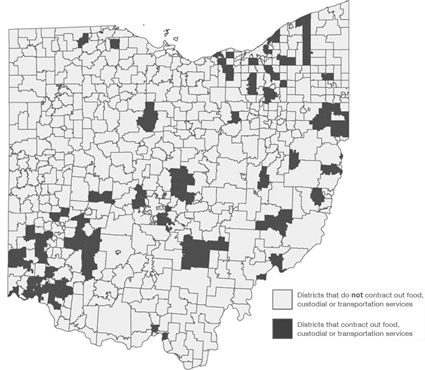 [*] Ohio’s privatization rate is likely lower than nearby Illinois too. The Illinois Policy Institute found in 2008 the state’s overall contracting rate to be 56 percent. Even if that figure dropped dramatically in the past seven years it would strain credulity to suggest it fell below Ohio’s rate. Collin Hitt, “A Survey and Overview of Privatization in Illinois’ Public Schools,” Illinois Policy Institute, July 24, 2008, http://perma.cc/4D72-AFZE.