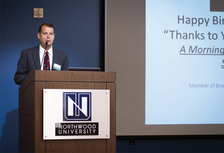 On July 31, the Mackinac Center partnered with Northwood University for our annual celebration marking the life and work of the late economist Milton Friedman, held on his birthday. Dr. Jason Taylor, the Jerry and Felicia Campbell professor of economics at Central Michigan University and a member of the Mackinac Center’s Board of Scholars delivered the keynote address.

Taylor’s talk focused on Federal Reserve policy and the various ways that governments can respond to economic downturns. Using the amusing analogy of a race between two horses, Keynesbiscuit and Marketariat, Taylor illustrated the differences in speed and effectiveness between government intervention and the market.

When a recession begins, according to Taylor, the market begins to correct for imbalances almost immediately. The government and regulators must wait six months, at a minimum, before they can even confirm that a recession has taken place and then take their own steps to correct it.

The Federal Reserve may take quick and decisive action, manipulating interest rates and the money supply, but other branches of government may feel compelled to intervene as well. It can take months for a legislature to agree on a recovery package, sometimes pouring billions of dollars into an economy already rebalanced by market forces.

For his part, Friedman advocated a very limited approach to government manipulation of the economy, suggesting that the Federal Reserve act cautiously and that other branches of government allow the market to do what it does best.

Unfortunately, Friedman’s advice is not always followed, but when it is, the evidence is compelling: Market downturns throughout history have been gentler and quicker when governments take a hands-off approach to correcting them.

The Mackinac Center hosts public events on a variety of topics throughout Michigan. To learn more about Friedman Legacy Day and other events, visit Mackinac.org/Events.