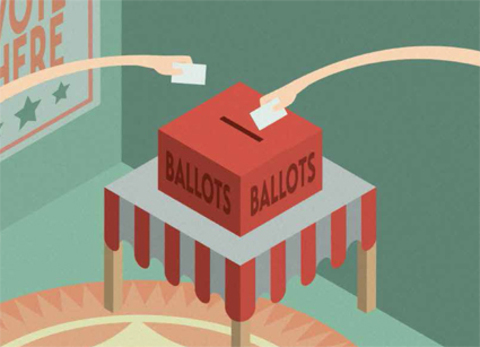 Though the November 2016 election is 14 months away, the Board of State Canvassers has already approved petition wording for eight potential ballot proposals. The approval is only a preliminary step, but voters could face a crowded ballot in the general election. Here is a glance at the proposals:

A well-funded group called Protecting Michigan Taxpayers is collecting signatures for voter-initiated legislation that would repeal the state’s 50-year-old prevailing wage law, which prohibits governments and schools from awarding construction contracts to the lowest bidder unless the contractor pays wages based on regional union pay scales. It is estimated the prevailing wage law costs Michigan taxpayers $224 million annually.

The Legislature could enact its own repeal without the signature campaign, but it is not clear whether Gov. Rick Snyder would sign it.

Meanwhile, a group called Protect Michigan Jobs says it might work to place a proposal on the ballot to preserve or reinstate the prevailing wage, depending on what happens with the repeal effort.

The union-backed group Citizens for Fair Taxes is seeking a voter-initiated law it calls the Corporate Fair Share of Taxes Act, which would increase the state’s corporate income tax rate from 6 percent to 11 percent. The additional $900 million it is estimated this would extract from business enterprises would be earmarked to road repairs and maintenance.

The only unions currently pushing the proposal are the Michigan Labor District Council, the Operating Engineers and the Michigan Regional Council of Carpenters and Millwrights. Other unions may give their support.

Business groups argue that this proposal would be disastrous for the economy. The Coalition Against Higher Taxes and Special Interest Deals, which spearheaded opposition to the 2012 ballot proposal that would have enshrined collective bargaining in the Michigan Constitution, is preparing to lead the fight against this proposal if it gets on the ballot.

The group Raise Michigan is promoting an earned sick time act, which would mandate a paid leave policy that all employers would have to adopt unless they chose to provide even more generous benefits. Raise Michigan was behind last year’s campaign to raise the state’s minimum wage.

So far this proposal has shown no signs of having sponsors with deep pockets, but it could end up drawing large amounts of funding from Washington, D.C. interests.

Fracking, which is short for hydraulic fracturing, is a process for extracting oil and natural gas by injecting water, sand and chemicals at high pressure into shale rock below the earth’s surface. The Committee to Ban Fracking in Michigan insists that its measure would only affect fracking that involves horizontal wellbores. That type of fracking, however, is one of the techniques that has led to the natural gas revolution. The same group failed in a previous ballot campaign. So far it has attracted relatively little financial support, but the reaction of those opposing the proposal indicates they are taking it very seriously.

The Michigan Comprehensive Cannabis Law Reform Committee is fielding a different proposal, called MILegalize. It, too, would legalize the recreational use and cultivation of marijuana by people 21 years of age and older. But local governments, rather than the state, would be given regulatory authority. The proposal specifies that marijuana sales would be subject to a 10-percent excise tax and earmarks how those revenues would be allocated.

The Stop Overcharging initiative would create a Fair Medical Prices for Consumers Act, which would impose a limit on how much health care providers could charge consumers. Specifically, a doctor’s office or hospital would be prohibited from charging a person more than 1.5 times the amount it accepts from another health care payer for the same service. The impetus for this proposal comes primarily from health care providers charging higher prices for goods and services provided to patients under Michigan’s unique auto insurance system, which requires motorists carry insurance that includes unlimited personal injury protection benefits (PIP).

This petition drive is on hold, pending possible passage of Senate Bill 248, which would place some limitations on those unlimited benefits. The bill passed the Senate but is stalled in the House.

The Let’s Vote Michigan constitutional amendment would change election law so that all elections would be conducted by mail. Voters could also deliver their ballots in person. As a proposal to amend the Michigan Constitution, it requires more valid signatures than the other proposals listed here before it goes to the voters (10 percent of the number cast for governor in the last gubernatorial election, or 315,654). It does not seem to have much financial backing and appears to be the cause of two progressive activists.

A long way to go

The eight proposals mentioned above have cleared one important hurdle. Their backers have secured the state’s approval of the boilerplate language their petition forms include, as well as the layout and design of the forms. (Such an approval is called “as to form.”) Among activists, it is considered a good idea to get approval “as to form” before circulating petitions, lest the signatures be rejected on the grounds that the forms were improperly formatted.

Each of the first seven proposals mentioned here need 252,523 valid signatures collected before June 21, 2016, and the signatures must come within a 180-day period. Because the vote-by-mail proposal would change the constitution, it requires 315,654 valid signatures. If the constitutional amendment garners the required number of valid signatures, it goes on the November 2016 ballot. The other proposals would change state law but not the state constitution. Once one of those proposals secures the number of required signatures, it faces one of two fates. The Legislature may enact it into law within 40 days by a simple majority vote (bypassing the governor). If it does not, the proposal goes to voters for their approval.

The number of potential ballot proposals could increase over the next several months. There has been considerable talk of an effort to establish a graduated income tax in Michigan, but no such proposal has been introduced so far. Such a proposal would be a constitutional amendment.