The Conservative Heart: Making Ideals That Work into Ones that Persuade 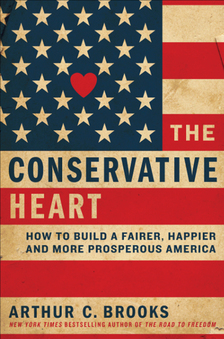 Arthur Brooks, president of the American Enterprise Institute, has released his sixth book in the liberty movement genre with “The Conservative Heart.” At first, I was put off by the title. Conservatives, having been through eight unfortunate years of “compassionate conservatism,” will have to explain, once again, that conservatism doesn’t need an adjective to make it not scary, and no, they don’t exist to bite people’s heads off.

Fortunately, my misgiving faded as I went to the heart of the book, whose full title is “The Conservative Heart — How to Build a Fairer, Happier and More Prosperous America.” Brooks makes the case that while conservatives are more charitable and happier than their liberal counterparts, they fail to communicate that they care. Surveys show conservatives are viewed as having strong moral values and leadership skills. But on empathy and compassion, liberals win hands down — despite the overwhelming evidence that conservative ideals about free enterprise, property rights, free trade and the like are the most effective way to address poverty, social injustice and income inequality.

Brooks asks the “yes, but” question: If conservative ideals work, why haven’t all Americans adopted the cause? He points to the developing world to show that capitalism has been a powerful means for people to make great strides in a short time in greatly improving their standard of living.

For decades now, the U.S. has attempted to make a dent in poverty with its much-heralded War on Poverty. But despite the trillions of dollars spent by an army of intellectuals and service professionals, the war has been a failure. A line graph of the U.S. poverty rate between 1961 and 2003 tells the tale. Since 1966, the line has been stuck within a narrow band of 10 to 15 percent of the population, moving along with economic cycles. The most dramatic change in the rate came between 1961 and 1966, when, not coincidentally, America’s growth rate was 4.53 percent (four times the levels we see today) and the so-called war had not yet ramped up.

Conservatives love reading and discussing such data, but merely doing so is not the way they will convince the world that their policies work. To win others over, conservatives must prove they are empathetic and have a moral purpose. To that point, Brooks provides a roadmap in a chapter called “The Seven Habits of Highly Effective Conservatives.” These habits, no more than six words long, should be posted on the desk of every supporter of liberty. My list is next to a copy of “How to Win Friends and Influence People,” which, no surprise, uses some of the same techniques.

What I liked best about the “Seven Habits,” was Brooks' step-by-step guide in dealing with specific audiences, which he labels “true believers,” “persuadables” and “hostiles.” He talks about the importance of fighting for people, not things — think Ronald Reagan — and demonstrates the point with a word cloud of a Reagan speech. The word “people” stands out prominently.

The fact that the liberty movement needs a book like “The Conservative Heart” speaks for itself. How many books are there telling liberals how to be more empathetic and compassionate? The goals are often the same — fighting for people and improving opportunity for all. The ideals of free markets, rule of law, and strong non-governmental institutions work, but their advocates they need to keep this in mind: To get the country to listen, people have to know that you care beyond things like data, charts, and abstractions.