School Choice Shines at the Capitol 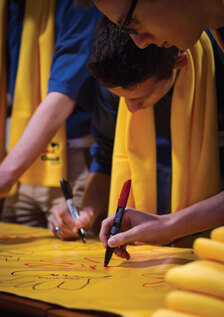 Students sign their names on a banner at the National School Choice Week event in Lansing January 27, 2015.

The last week of January is National School Choice Week, an annual celebration of the fact that families can choose among a variety of options in order to find the best school for their children. Across America, there are thousands of events held to celebrate. In Michigan, the main event took place in Lansing.

The Mackinac Center for Public Policy, the Great Lakes Education Project, and the Michigan Association of Public School Academies teamed up with National School Choice Week sponsors to bring supporters and students to the Capitol and to engage state officials on this important issue.

Approximately 150 charter school students visited the state Capitol to showcase their schools. Filmmaker Bob Bowdon made a visit to show and discuss his latest documentary, “The Ticket,” which highlights ways families make use of school choice throughout the country.

Gov. Rick Snyder honored the event by issuing a proclamation in support of making a wide range of educational options available to Michigan families, and designating the week as National School Choice Week.

State legislators showed their support, as well. Rep. Harvey Santana, D-Detroit, spoke to the visiting students about the importance of education. Later in the day, Sen. Phil Pavlov, R-St. Clair, spoke about the future of school choice to a group
of school reform activists.

The event began with the screening of “The Ticket.” The short film shows the many ways school choice is provided.

“The Ticket” highlights innovative school choice options, such as "parent trigger” laws, which enable parents to force remedies on chronically failing schools that refuse to change. Another option showcased was homeschooling, which was mostly illegal across much of the country a few decades ago, but is increasing in popularity today due in part to educational co-ops. Public school district choice is another option. Michigan’s Schools of Choice program was first authorized in 1996, and lets students attend school districts other than just the one to which they are assigned by ZIP code.

In 2011, an artificial cap was lifted on the number of charter schools in Michigan, which are public schools that have been freed from restrictive mandates such as being forced to engage in collective bargaining with teachers unions.

While vouchers are prohibited in Michigan by a state constitutional amendment adopted in 1970, programs in 13 other states allow participating parents to take some of the money that would be spent to teach their children at a conventional public school and use it to send them to a school they choose — including a private school and often a Catholic school. In 18 states, taxpayers can take advantage of income tax deductions or credits that encourage school choice. A new kid on the block in school choice options is online learning or “cyber schools,” where technology allows students, especially those with unique educational circumstances or seeking an escape from bullying, to gain wide access to educational opportunities.

After watching the documentary, the chair of the Michigan Senate education policy committee, Sen. Phil Pavlov, R-St. Clair Township, spoke about the expansion of educational opportunities in the state. Pavlov was instrumental in removing the arbitrary cap on charter schools, which just a few years ago had generated a 10,000-student waiting list and forced children into enrollment lotteries.

“I’m a big believer in the idea that parents make the best choices for where to educate their kids,” Pavlov said. “We need to put the students first in the equation.”

Then, about 150 students packed the Capitol rotunda to celebrate the choices in schooling they now enjoy. A choir and a step team from Bradford Academy in Southfield performed, as did a dance team from the West Michigan Academy of Arts and Academics in Spring Lake. Aviation and robotics teams from other charter schools, including the West Michigan Aviation Academy in Grand Rapids and FlexTech High in Brighton, displayed their work.

James Smith, a senior at the aviation school, said he heard about the school through his mother when it was getting off the ground in 2010. There is a lottery to get into the school and he’s thrilled to be there.

“Students take all of the normal classes that you would take anywhere, but there is a focus on aviation,” Smith said, adding that the school also offers engineering and robotics programs.

His classmate Lexie Asbury started at the school as a sophomore after going on a private flight with her grandfather and being inspired to learn to fly.

Taryn Winfrey and Daija Hayes sing in the choir for Bradford Academy. They both began attending the charter school in grade school because their families believed it to be the best educational opportunity in the area where they live.

“It’s a smaller school and I love the music programs,” Hayes said.

Cathy Cantu is the school director for the West Michigan Academy of Arts and Academics. “We believe many students learn best across multiple modalities,” Cantu said. “We feature all the classes of any schools, but music, dance, and the arts intersect across the subjects.”

Every student had a different explanation for how they ended up exercising the choice to attend a school their family selected rather than one to which they were assigned. All of them were grateful their families had the opportunity to choose.

The Mackinac Center is committed to making sure every Michigan parent has the freedom and flexibility to choose the best education for their child, and celebrating National School Choice Week is part of that effort. Often, critics of school choice focus on maintaining existing educational institutions, rather than examining whether those institutions are acting in the best interest of children. The most recent example can be found in Saginaw, where the Saginaw Public School District chose to demolish a vacant school building, rather than sell it to a public charter school.

The Saginaw board’s actions ensure that both Saginaw and charter school students lose: Saginaw could have used the $3.25 million from the sale to pay off its debt, while the charter school would have offered students an additional educational option in a previously vacant school building.

At the end of National School Choice Week, The Detroit News ran an op-ed from Rep. Santana that discussed the importance of giving Michigan families access to educational choice.

“If we stop focusing on adult institutions and start trusting parents to make the right choices for their children, everyone will win,” Santana wrote.

Unfortunately, Saginaw’s school board is still placing the needs of the institution ahead of the needs of Saginaw children. However, the popularity of educational choice in Michigan shows that it is an organically growing force that cannot be stopped by a few misguided decisions made by local school officials. As school choice becomes ever more popular, more state and local officials will realize that the best thing to do is to put the needs of Michigan students first.