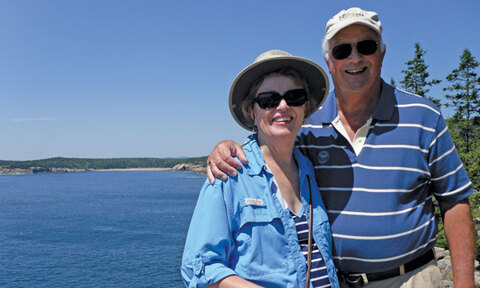 The Mackinac Center for Public Policy is funded solely by freedom loving individuals and organizations that find value in its conviction of free-market principles. For this issue of IMPACT, we hear from Tom McMullen (pictured here with his wife, Debbie).

MCPP: Tell us about your family.

McMullen: My wife Debbie and I have three children. Two boys in their 40s and a girl in her 30s. Our middle son is in Sarasota, Florida. The other children are in Michigan.

It’s an interesting story of how my wife and I were engaged. The Vietnam draft was going on. I was called in as a 24-year-old. The drafter asked me if I genuinely wanted to go to Vietnam, and I told him honestly, “No.” He told me there were two ways to stay out, either keep running the business I was running or get married.

I told my girlfriend at the time about this discussion. She asked, “Is this a proposal?” I guess it was. We eventually got married. However, I would have gone to Vietnam if it was required.

MCPP: What do you do for a living?

McMullen: I started McMullen Properties in Ann Arbor 40 years ago. We have around 30 employees. We’re involved in real estate development, investment, offices, apartments and we were in the home-building business for 10 years.

At first I bought and sold, making a profit that way. Then, I figured out that when you build it, continue to own it, and then lease it to someone, it’s easier to fight through tough economic times because you still own something at the end.

MCPP: Where are you from originally?

McMullen: Ann Arbor. Grew up here through high school. Then went to Brown University in Rhode Island, spent some time in Pennsylvania, then Illinois, and came back to Ann Arbor.

What brought me back to Michigan is an interesting story. I was working at a good job for a big company in Chicago. However, I wanted to get started in construction. My college major was political science, not exactly in line with building, but that’s where I wanted to go. My dad was a homebuilder, too. I worked for him as a kid. I quit the good job in Chicago and moved back to Michigan. I was single at the time. I started remodeling homes to get started. Then I bought some property and built a spec home. That sold and then I got married and stayed in Ann Arbor ever since. This is where we raised our family. I still follow Brown University, but I’m also a Wolverines fan too.

Ann Arbor is quite a town. It’s really solid on many fronts: athletically, academically, culturally and economically. The economy is very strong and the college is strong. It keeps us out of recessions and from hitting rock bottom. We get along really well.

MCPP: What was your first experience with the Mackinac Center?

McMullen: I suppose the first experience was getting newsletters and Viewpoints. A lot of what I was reading was making sense. I am particularly interested in labor issues, having had my own construction company.

I received a copy of the Mackinac Center report on Unionization for the 21st Century and am excited to read it. Successful unions will be the ones that adapt to the changing times.