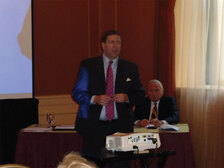 The Mackinac Center for Public Policy’s popular studies about cigarette taxes and smuggling have once again drawn the attention of lawmakers from across the country.  This time, the National Foundation of Women Legislators hosted Mackinac Center experts on the subject at its 2014 conference last November.

Our study, published in 2008 and updated three times since, estimates the smuggling rates for 47 of the 48 contiguous United States for both “casual” and “commercial” smuggling. Casual smuggling involves individuals crossing a border to buy cheaper smokes. That is not always illegal, as some states — Michigan not among them — permit small amounts of cross-border shopping. Commercial smuggling involves long-haul and large shipments that can be characterized as an organized crime.

I presented these estimates at a foundation forum on illicit tobacco, which also included testimony from law enforcement, an expert on regulation, and the head of a convenience-store association in Canada.

My coauthor Todd Nesbit and I estimate that through 2012, 27.6 percent of all the cigarettes consumed in Michigan were smuggled in. While this was a substantial percentage, Michigan was not America’s number one smuggling state. New York — where almost 57 percent of the total market was smuggled in — has that dubious distinction. Ours is not the only estimate showing the Empire State’s smuggling rate above 50 percent.

In my remarks, I also noted that other scholars have been doing fascinating research — mostly on the East Coast — in which they collect discarded cigarette packages and examine each for the tax “stamp” placed on each pack. A tax stamp indicates in which jurisdictions excise taxes have been paid.

In 2013, a group of eight scholars released a study summarizing their analysis of discarded cigarette packs in five East Coast cities: Philadelphia, New York City, Boston, Providence, and Washington D.C. Between 30.5 percent and 42.1 percent of the collected packs did not bear the local tax stamp and were in these cities as a result of illegal trafficking.

These authors also calculated that the five cities in their study would collect $680 million to $720 million more in revenues if they could eliminate the smuggling problem.

The Mackinac Center estimates that the state of Michigan loses $175 million in excise tax revenue to smuggling activities.

These estimates are state, not city specific, but both our studies and those of the scholars focusing on the East Coast seem to indicate that smuggling could be deemed “rampant.” Our methodology involves comparing the published smoking rates for each state with its paid, legal sales per capita. The difference between the two has to be explained somehow, and we believe it is largely explained by illegal activities.

Several members of the National Foundation of Women Legislators publicly stated the need to tackle the issue of illicit trade more aggressively. While I recommended doing so by rolling back excise tax rates in high-tax states, other panel members emphasized greater communication between law enforcement agencies, plus stiffer penalties.

Earlier in 2014, Nesbit and I presented our findings to the Council of State Governments and the Federation of Tax Administrators. The CSG is a nonpartisan group that serves both Democrats and Republicans in state legislatures across the country. The FTA assists state taxing authorities such as state treasuries.

The next iteration of the Mackinac Center’s cigarette taxes and smuggling study — based on data through 2013 — will be released in early 2015.