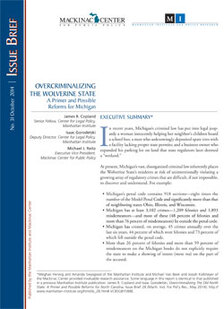 Our recent Overcriminalization Study is available online at Mackinac.org/ 20644.

Ohio recently enacted a law that protects the rights of individuals and can serve as an inspiration for the Michigan Legislature.

The Ohio bill dealt with criminal laws and the criminal intent a prosecutor must prove to secure the conviction of a defendant. The bill goes even further and renders void any future legislation that fails to specify the level of intent required for conviction of a crime.

Traditionally, conviction of a crime required the combination of two factors: a criminal act and a culpable state of mind. Since the industrial revolution, however, legislatures have increasingly relied on the use of criminal sanctions to accomplish regulatory aims. A common feature of those laws is that they eliminate the obligation to prove that a defendant intended to commit a criminal act; if the defendant commits the act, regardless of his state of mind, he can be held strictly liable.

This becomes a concern when one surveys the explosion of criminal laws in recent years, both at the federal level and in many states. A study published by the Manhattan Institute and the Mackinac Center found more than 3,100 criminal laws on the books in Michigan, with the Legislature adding an average of 45 new crimes in each of the last six years. With an ever-escalating number of crimes one can commit, people can be caught in a violation for conduct they simply didn’t realize was illegal.

Our study recommends pruning obscure and obsolete laws from the books. It also recommends establishing a default standard of criminal intent for laws that are silent on the issue. Such a reform would concentrate criminal sanctions on truly objectionable behavior and would serve to only convict those who choose to commit a crime. And, much like Ohio’s recent legislation, this reform would protect individual rights and improve the efficiency of the justice system. Senate Bill 20, introduced by Sen. Mike Shirkey, R-Clarklake, would accomplish this goal and is worth consideration in the new legislative session.