Events Highlight the Marriage of Special Interests and Government Power 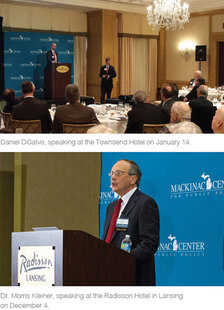 On Dec. 4 the center welcomed Dr. Morris Kleiner, who recently wrote the book, “Our Guild-Ridden Labor Market: The Curious Case of Occupational Licensing.”

Dr. Kleiner spoke to a group at the Radisson Hotel in Lansing for the Mackinac Center’s Issues and Ideas forum.

He pointed out the history of guilds. “In the Middle Ages, guilds arose to protect the members of the guild, using their power and the state to exclude others and get business for themselves,” Kleiner explained.

He said there’s been a movement away from manufacturing, where unions dominate, to the service economy, where licensing dominates.

Kleiner contends that increasingly, regulations keep people from entering the workforce and trying new things, while freedom produces an environment where innovation and growth occur.

On Jan. 14, more than 60 people gathered at the Townsend Hotel in Birmingham for another Issues and Idea forum, this one featuring Daniel DiSalvo.

The assistant professor of political science at The City College of New York-CUNY and senior fellow at the Manhattan Institute’s Center for State and Local Leadership shared the findings of his new book, “Government Against Itself: Public Union Power and Its Consequences.”

DiSalvo acknowledged differing ideas regarding the proper size of government. However, he pointed out the thoughts of Alexander Hamilton, who said, “A government ill executed, whatever it may be in theory, must be, in practice, a bad government.”

Full videos of these speeches and other past events are available on the Mackinac Center event page at www.mackinac.org/events.