‘How Blessed We Are’

A 20-Year Retrospective with the Center’s Kendra Shrode 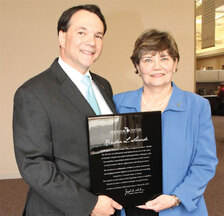 Kendra Shrode has served the cause of liberty at the Mackinac Center for 20 years.

Kendra Shrode, the longest-serving member of our team, just celebrated her 20th year at the Mackinac Center. A former vice president of operations and a current assistant to President Joseph Lehman, Kendra recently discussed her time at the Center with Assistant Editor Lindsey Dodge. An edited transcript of that interview appears below.

MCPP: What initially attracted you to the Mackinac Center?

Kendra: Well, I was looking for a job, and the headhunter that Larry Reed was using was one my husband had used in his career. So that man had helped me with my resume when I graduated from school. And I was a late graduate. I finished my education after I was widowed, so I was almost 45 when I got my degree.

MCPP: Where did you get your degree?

MCPP: So you’re from Michigan?

Kendra: No! My daughter says when she’s asked that she’s from the United States of America. I’ve lived in seven states.

MCPP: But you like The Detroit Tigers best, right?

MCPP: Were there any other jobs along the way that piqued your interest? Why stick with the Mackinac Center for so long?

Kendra: Well, I’ve always been interested in any job I’ve had. I think that’s part of being a good worker. I have a very strong work ethic.

But it’s a lot different if you’re selling a widget. [At the Center], you are making a difference for liberty. I mean, the passionate feeling at the end of the day or the end of an event is just — well, I used to be at a marketing firm that sold lawnmowers. Imagine me selling lawnmowers! ... I think I must have done a good job, but — it’s a job.

MCPP: Whereas this is …

Kendra: This is something much, much deeper. And I mean, I firmly believed in a lot of the things the Mackinac Center said, but I didn’t exactly know why. And I didn’t understand economics at all. I didn’t particularly care for it in school. ... I have learned more economics driving around this state in [Center President Emeritus] Larry Reed’s car. He just pontificated —  you know, why things work this way. You forget the supply-and-demand curve and all that stuff the textbook tells you, and you just really relate it to people. It’s a whole different ballgame. Much more interesting — especially if you like people, and you know me well enough to know that I like people.

MCPP: So what was it like working for the Mackinac Center when it first started?

Kendra: Well, one funny thing is when I interviewed with [former Senior Vice President] Joe Overton. He offered me the job, and I told him I could not take it until I met Larry. I was the fourth employee, so you can imagine the dynamics with only four people. Our office space behind Pizza Sam’s was the size of the dining room in our kitchen in this building. So we were pretty close together.

I was still traumatized by my loss, and I didn’t think I could take a job that wasn’t going to work. I wanted to really feel like this might be — you know, that I’d get five or six years out of it [laughs]. Anyway, I told you I really wanted to meet Larry. And it just so happened they were having a strategic planning meeting that weekend at Larry’s house. And so I went out and walked away from that meeting very comfortable with their relationship with each other, and I said yes. And the rest is history.

MCPP: What came next?

Kendra: There were some tough times. Financially. I was never concerned about going under for myself, but I know I had a lot of sleepless nights worrying that the organization might not make it. So to go from there to having our own signature building, to having the reputation that we enjoy not only in this state, but on the national scene, as well as internationally, has been very, very special.

MCPP: Do you have any advice for younger kids getting into the liberty movement?

Kendra: Read, read, read, read, read. And I think, avail yourself of people like Larry Reed and Joe Lehman — people who have written so much and have such a strong understanding of policy and how it works.

And the other thing is travel, travel, travel. Because I firmly believe that the more you see of this world, [the more] you will be cognizant of how blessed we are, even though there are times that we’re very concerned about where we’re going. Just to go to these other cultures and see what they haven’t had … is a good awakening for those of us who have been very comfortable all of our lives.

We have had people from a lot of countries come to this building. I can remember two young men from Africa. I picked them up at the airport, and we went to — I can’t even remember what restaurant it was — and you know the kind of servings that we have in America. … These two young men — I mean, just the look on their faces when they looked down at this plate. There was probably enough food on that plate to have fed a family in their hometown. … And that’s what our freedom has given us: being able to live in this kind of environment.

MCPP: Part of what keeps us fighting.