Kevin and Carole Chase:
Not Just “Business As Usual” 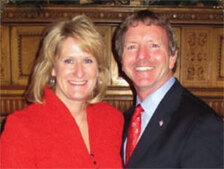 Kevin and Carole Chase relied on hard work and great customer service to grow their specialty plastics business from a two-person shop to a $165 million enterprise.

With business booming, the Chases realized they also needed a way to stay informed about legislation that could affect their company. For that service they turned to the Mackinac Center for Public Policy.

“We became members in 2008. We saw the Center as the think tank that could educate us on public policies and the issues,” Kevin Chase said. Through their company, the couple has supported the Center’s fiscal policy work, the Michigan Capitol Confidential news site and the Mackinac Center Legal Foundation.

The Chases are founders of Chase Plastic Services Inc., a leading North American distributor of specialty, engineering and commodity thermoplastics for applications in the automotive, medical, computer and hundreds of other industries.

Based in Clarkston, Chase Plastics is marking its 20th anniversary year in 2012 with record revenue and a workforce of 88 people, Kevin Chase says. That’s a big increase from the days when he was the only salesperson, and he made deliveries from the trunk of his car.

Their company could create even more jobs if there were less government regulation, according to Chase. He credits the end of the Michigan Business Tax surcharge and later changes in Michigan’s corporate tax structure with creating eight to 10 jobs at Chase Plastics.

“We put those (tax savings) back into the organization through employment.”

Kevin Chase also works to advance free markets and limited government through the Independent Tea Party Patriots, recognized as one of Michigan’s most influential Tea Party organizations. That organization also has benefitted from the Mackinac Center’s educational material and guest speakers, said Chase, who helped found the ITTP and remains on its advisory board.

“Politics and government affairs affect you all the time as a business owner. You need to be aware.”