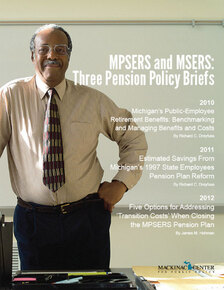 For 50 years, the state of Michigan has been procrastinating on paying its unfunded liability on the Michigan Public School Employee Retirement System, or MPSERS. James Hohman, assistant director of fiscal policy at the Mackinac Center for Public Policy, has researched and written a new study with five proposed solutions to the fiscal quagmire, titled “Five Options for Addressing ‘Transition Costs’ When Closing the MPSERS Pension Plan.”

Hohman grasps the state’s dilemma from its beginnings in the Michigan Constitution of 1963, which explicitly required prefunding these pension benefits. This is a far cry from the current complaint that “transition costs” will outweigh the benefit of switching to a defined-contribution system. With five options listed out one by one, the state is presented with the realities of the financial situation in a constructive, results-oriented format.

To supplement this study, the Center has also put out a “pension trilogy,” that combines three of our most recent studies on the topic. These provide background and perspective on the proposed solutions to the problems.

The discussion of pension reform has been a hot-button issue in the Michigan Legislature, particularly as surrounds the idea of transition costs. As Hohman puts it, “This has been a novel contribution to the debate because everyone has treated these alleged transition costs as de facto reality, but when I started exploring them in detail and what exactly they meant and exactly what they represented, the whole idea fell apart.”

Currently, legislation to switch MPSERS from a defined-benefit to a defined-contribution system is in the House – the legislation has already passed the Senate as of May 17. While the reform future of MPSERS is by no means certain, Hohman says, “I think the paper’s really having the effect of getting legislators to consider these reforms.” Through the work’s careful research and flexible suggestions, the Mackinac Center looks forward to helping improve the lives of both the public employees covered under the plan and the taxpayers funding it.