A Blueprint for Regulatory Overhaul 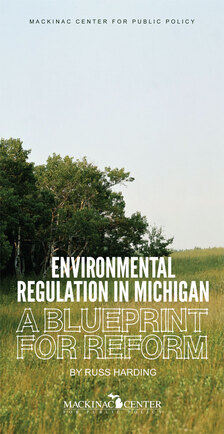 The most troubling aspect of the growth of government in the past 50 years has been the expanding scope of unelected government bureaucracies and their near-monopoly on interpreting many of the laws that govern us.

A new Mackinac Center publication addresses this with reforms to relocate this regulatory power where it belongs — with the people's elected representatives in the Legislature.

Released just in time for a new governor and many rookie legislators, “Environmental Regulation in Michigan: A Blueprint for Reform” lays out the changes needed to restore accountability to the regulatory process. Russ Harding, the Mackinac Center’s senior environmental policy analyst, proposes general principles for a good regulatory system, then suggests statutory and structural changes to protect the environment while also fostering a flourishing economy.

Highlighting the necessity for sensible regulatory policies amidst great economic competition between the states, the Blueprint explains that businesses take regulatory restrictions seriously in choosing where to invest and create jobs. The Blueprint reforms would transform Michigan’s harsh regulatory climate into a system responsive to Michiganders’ needs.

The principles in the Blueprint focus on the need for regulatory agencies to be limited in their power, accountable to the people and fair to those seeking permits. Currently, the Legislature writes generic laws and lets unelected regulators determine the specific applications of the laws.
As such, these administrators, who are not accountable to the people, essentially have the power to create the rules that affect all individuals and businesses in Michigan.

Proposed changes in statute include requiring legislative votes on regulations rather than allowing unelected bureaucrats to set the rules, imposing deadlines for permit-issuance to expedite the regulatory process for individuals and business, preparing fiscal reports on all regulations so the full costs are known to residents and policymakers, and enacting a Regulatory Bill of Rights as a guarantee that all will be treated fairly and promptly in the regulatory process.

The Blueprint also suggests administrative changes. Shedding permitting power from the Michigan Department of Natural Resources and Environment to a separate agency responsible for all permitting would prevent a conflict of interest between issuance and enforcement, both of which currently fall to the DNRE. Furthermore, reallocating responsibility for certain programs to the local or federal level can help improve the environment and reduce costs. Wetland permitting can be effectively managed by federal agencies, as is done in the vast majority of states. Landfill regulation, on the other hand, would be best managed on the local level, as local governments have the most interest in properly regulating them. Finally, privatization opportunities should be explored for functions like environmental laboratories and certain aspects of permitting.

For the Blueprint, Harding drew on his extensive experience in the realm of environmental regulation and analysis, particularly his seven years as the director of the Michigan Department
of Environmental Quality.

The Blueprint’s case for change and specific reforms have caught the attention of many. Harding has discussed the document with incoming Gov. Rick Snyder’s transition team and incoming Attorney General Bill Schuette. The Blueprint was covered in MIRS News, and Harding discussed it during radio interviews with WJR’s Frank Beckmann, WTCM’s Ron Jolly, WMKT’s Greg Marshall, WOOD radio and Michigan Radio. He also spoke about the Blueprint to an economic development group in Saginaw, and wrote related Op-Eds for the Lansing State Journal and The Oakland Press.

Harding has emphasized the immediate importance of the Blueprint: “We hear a lot about the loss of jobs to foreign competition,” he said. “But a far greater threat is the loss of jobs to other states that have fewer regulatory barriers.” Harding’s proposals would improve both Michigan’s natural and economic environment.