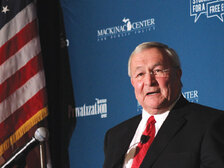 Leading up to the general election, it was clear that the next governor of Michigan would face tremendous opportunities and entrenched obstacles. Whether the next state executive would be Ann Arbor businessman Rick Snyder or Lansing Mayor Virg Bernero (Snyder ultimately prevailed), the winner would have to act decisively if he was serious about improving Michigan’s economic fortunes and subduing government spending.

Over the last several years, the current governor and other state officials blamed many of the state’s problems on “globalization,” distress in the auto industry and other vaguely defined trends that were implicitly beyond their ability to control. Michigan, lawmakers told us, was a victim of circumstances. The justification for many bad policies — from tax increases to expanding failed economic development programs — was rooted in this mindset.

But there was a gaping hole in the victimization argument. Oakland County, a locale that experienced all the same externalities as the rest of the state, had a balanced budget, earned a triple-A bond rating and attracted new enterprise. If Oakland County could be well-managed during these trying economic times, why couldn’t the state?

The Mackinac Center invited Oakland County Executive L. Brooks Patterson to answer this and other questions at a public event at the Townsend Hotel in Birmingham on Oct. 14. What policies had the county pursued that might be applicable at the state level? What advice would Patterson offer to the incoming governor for leading Michigan out of its economic malaise?

More than 300 people — both longtime Center supporters and new friends — turned out to hear Patterson’s insights. During the reception, guests enjoyed hors d’oeuvres and rubbed shoulders with the likes of former U.S. Attorney General Ed Meese.

The event, which was simulcast live on the home pages of the Mackinac Center and The Oakland Press, was kicked off by Center President Joseph G. Lehman. Lehman reminded the audience that when Republicans took over Congress in 1994 and gained the White House in 2000, “the policy accomplishments didn’t quite match the campaign promises. Government did not shrink. We did not become more free overall. … By the time Republicans were growing government as fast as the Democrats that they’d campaigned against, the voters put them out on their ears.”

Lehman explained how the Mackinac Center was employing new tools to increase transparency and hold politicians accountable. MichiganVotes.org, Michigan Capitol Confidential and investigative videos can equip the “people who are the most civically engaged” because they “have disproportionate influence over policy.

Lehman also introduced a video of Bill Ballenger, editor of the political newsletter “Inside Michigan Politics.” Ballenger delivered an exclusive, detailed preview of the election, full of history, trivia and insider perspective.

Patterson was introduced by Mackinac Center Senior Economist David Littmann. “Our next governor and indeed all of Michigan government could learn a lot from reviewing the budgeting process and the market-oriented policies of L. Brooks Patterson and Oakland County over the last 18 years,” Littmann told the audience.

Patterson’s remarks were laced with self-effacing humor, praise for his leadership team and personal anecdotes, as well as recommendations for Michigan’s next governor. One part of Oakland County’s success, he said, is the practice of looking forward. Most governments, he noted, look at revenues and expenditures only one year at a time.

“Oakland County is the only county in America that has a three-year rolling budget,” Patterson said.

Looking forward allows the county to foresee and prepare for problems. For instance, the county expects a significant shortfall in revenues in 2014. “We’re already working on 2014 so when that year rolls up to us, what was a cliff … is going to be a molehill.”

In 1987, the county began addressing the liabilities associated with retirees’ health care. Now Oakland County is the only county in America to have completely paid off its health care debt, according to Patterson. “We’re out of the business. We don’t have a debt. When people come to work for Oakland County, they don’t get a promise of health care in retirement, they get a health savings account. … We don’t have those multibillion dollar legacy costs looming, because we started back in ’87.”

Other changes to employee benefits saved the county additional tens of millions of dollars over the years, Patterson added, and elected officials in the county more than once voluntarily rolled back their own pay. He also challenged department heads from both parties to cut their budgets. And they did.

Oakland County’s success in the face of a shrinking auto industry, a decade-long statewide recession, decreasing population and lost revenues provide a clear example to the next governor — and other elected officials — of how Michigan can succeed. They must be willing to look beyond the immediate, find savings within government and establish a friendly environment for job creation. To do otherwise — to claim that circumstances are beyond our control — is to guarantee that things will only get worse.