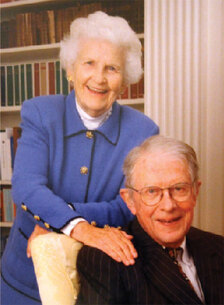 His race well run, Lovett C. “Pete” Peters passed away on Nov. 11, at the age of 97. He was the kind of man — wise, generous, good-humored and accomplished — whose passing makes one despair of ever meeting his like again. But he was also the kind of man who invested his time and treasure to benefit people he would never meet, including generations yet to come.

Any parent or child who has chosen a K-12 school apart from the government’s assigned “district” school has Pete Peters partially to thank. After a successful career as a financier in energy and other businesses, he “retired” at age 75 to begin a new career in ideas.

He founded the Mackinac Center’s sister think tank in Boston, the Pioneer Institute. He and his wife, “Ruthie,” also gave generously through their family foundation to school choice initiatives around the country, including in Michigan.

Pete was the kind of man who:

Few of Pete’s accomplishments in business, charity or public policy bear his name. I am glad I could tell you of some of them now. I’m reminded of a quote from Presbyterian pastor George Grant:

“Some men’s greatness may be seen in how largely they loom over the movements they launched. But greater men are they whose movements loom large over them — even to the point of obscuring them from view.”