An Introduction to the Overton Window of Political Possibility

Michigan's economy has been moribund for so long that one could be forgiven for thinking no one knows how to turn things around. But that's not true. The ideas that can revitalize Michigan's economy are not secrets; you are holding 101 of them.

So why haven't lawmakers enacted more of them? Because ideas take time to produce changes in policy. Yesterday's ideas that politicians considered politically impossible can become tomorrow's public policy.

The migration from mere ideas to law of the land can be described by a model called the Overton Window. This is the term my colleagues and I gave to a theory of change developed by the Mackinac Center's late vice president, Joseph Overton. After Joe died in 2003, I built a presentation around his idea, and I still use it to show how think tanks can shift public policy.

Joe shared his abstract concept with me in the mid-1990s. He observed that any collection of public policies within a policy area, such as education, can be arranged in order from more free to less free (or alternatively, from less government intervention to more). To avoid comparison with the left-right political spectrum, he arranged the policies from bottom (less free) to top (more free).

Many believe that politicians move the window, but that's actually rare. In our understanding, politicians typically don't determine what is politically acceptable; more often they react to it and validate it. Generally speaking, policy change follows political change, which itself follows social change. The most durable policy changes are those that are undergirded by strong social movements.

For example, prohibition was a policy change driven by a social movement that did not prove strong enough to sustain the policy. Certain environmental policies that have proven durable are backed by strong social movements that favor those policies — or at least the idea they represent.

When social and political forces bring about change, the window of political possibility shifts up or down the spectrum and can also expand to include more policy options or shrink to include fewer. The window presents a menu of policy choices to politicians: From their point of view, relatively safe choices are inside the window and politically riskier choices (or bolder ones, if you prefer) are outside.

Lawmakers who support policies outside the window are one of two kinds - true leaders who have the rare ability to shift the window by themselves, or politicians who risk electoral defeat because they are perceived as out of touch. This explains why key lawmakers in 2009 and 2010 were reluctant to support a massive federal health care bill seen as unpopular with the people. Officeholders knew a vote outside the window would subject them to the political Furies that are playing out at the time of this writing.

The Overton Window doesn't describe everything, but it describes one big thing: Politicians will rarely support whatever policy they choose whenever they choose; rather, they will do what they feel they can do without risking electoral defeat, given the current political environment shaped by ideas, social movements and societal sensibilities.

That's why it's important for the Mackinac Center and others to educate citizens on the nation's founding principles of limited government and free markets. Public policies rooted in those ideas produced freedom and prosperity unmatched by any other society in history. The same policies can return Michigan to prosperity now. A people animated by our nation's founding principles will shift the window of political possibility toward greater freedom.

I'm proud of the 101 powerful ideas developed by my colleagues and summarized in this pamphlet. I hope you will discuss them with your friends and encourage your elected representatives to consider your views on them.

(Editor's note: A version of this article was previously published at www.mackinac.org/11398.) 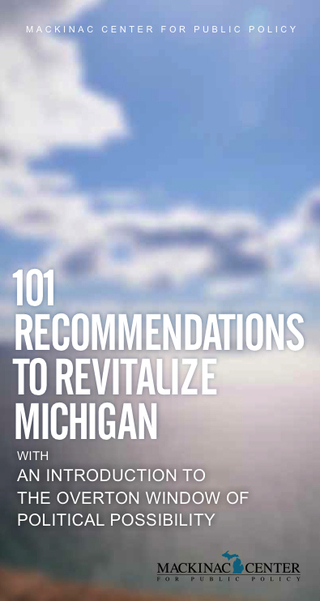