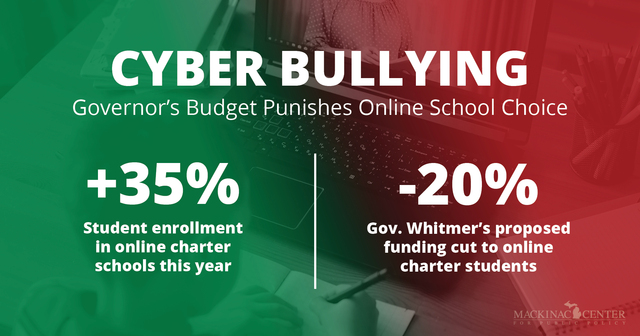 Michigan’s K-12 students are not the only ones who appear to have not learned enough during the pandemic. The governor, ignoring the important role cyber schools have filled with regular classrooms shut down, has repeated her earlier budget missteps by singling out these schools for fiscal harm.

Cyber schools are charter public schools that provide most or all of their instruction online, distinct from similar programs run by conventional districts. Last spring, while many other schools struggled to educate students remotely, cyber schools marched on. Thousands of Michigan families, desperate for better options, switched to them so their children could continue their learning, working with educators who have valuable experience delivering digital instruction.

A sizable enrollment shift thus occurred between October 2019 and October 2020: Student enrollment in Michigan cyber schools grew by 35%. Some online charters reached the enrollment caps in their contracts and had to stop accepting new students. In a typical year, families choose online charter schools due to specific health needs, to avoid bullying, or to find scheduling flexibility so they can pursue outside activities without disrupting their students’ academic progress. This educational option has proven to be a lifesaver for some families.

Yet Gov. Gretchen Whitmer wants cyber schools to receive 20% less in per-student funding than all other public schools. The case against this proposal is simple and straightforward. Students should not be treated as less because their families have selected an online charter school rather than a district online program, or any other full-time public education option. Cyber schools are already ineligible for a number of funding sources available to conventional districts, and shouldn’t be penalized on the source they rely on heavily to operate.

Yet somehow, seeking to cut cyber schools’ per-student funding has become an annual Lansing tradition in poor policymaking. This week’s budget proposal is Whitmer’s third consecutive attempt to enact cuts on cyber schools. Republican lawmakers rejected the effort in both 2019 and 2020, having turned down similar proposals made by the previous chief executive from their own party, Rick Snyder.

The current governor estimates her 20% cut to the cyber school foundation allowance would reduce state spending by $30 million, a tiny fraction of the school aid budget. Yet she also wants to give districts with declining enrollments an extra $200 million in “stabilization” funds. This would pay districts next year 70% of the formula funding for this year’s students who leave their rolls in the meantime. Under this plan, most districts would get about $5,800 for each student they lose.

That approach builds on a one-year old formula that primarily funds districts based on past enrollments. The change pays districts more money for students who are no longer there, while effectively punishing schools that successfully attracted more students. A subsequent fix restored full funding to growing schools, which prominently included many cyber schools.

If the $200 million allocation is intended as a permanent policy shift, then it represents a dangerous shift away from funding students. If intended as a post-pandemic stopgap, though, the extra state dollars would be redundant. Districts and charter schools that lost students in the current academic year are already due nearly $1.8 billion from two federal COVID relief packages. And that doesn’t include larger sums of money being fast-tracked through Congress now.

Once again, Michigan’s governor reveals a stronger affinity for funding institutions rather than students. Funding cyber school students on par with their peers is just the first and easiest way for the Legislature to reject that misguided philosophy.