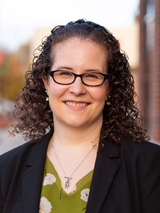 Morgan Shields was Legal Counsel and Director of Workers for Opportunity at the Mackinac Center for Public Policy.

Morgan received her law degree from the Antonin Scalia Law School at George Mason University, where she served as the Publications Editor of the Journal of Law, Economics & Policy and was a Writing Fellow in the legal writing program.  She received her LL.M. in taxation from Georgetown University Law Center.  She served as an Assistant General Counsel at the National Rifle Association of America for several years before joining the Mackinac Center in November 2018.  Morgan also served as an adjunct legal writing professor at the Antonin Scalia Law School for several years before relocating to Midland, Michigan.

Let's Give Workers Voting Rights to Keep or Reject Unions

Divide and Conquer: Democrats in Congress Pushing Unions on Workers

Collective Bargaining Does Not Equality Make

Another Day, Another Union Scandal