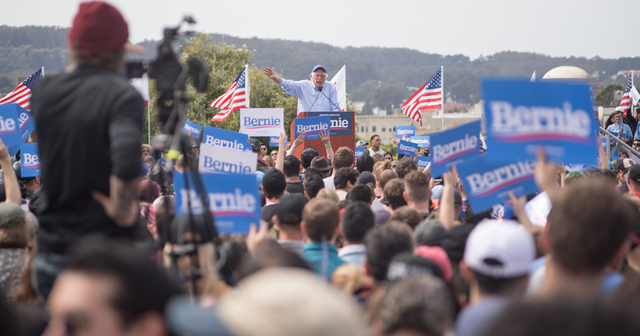 An exchange between a voter and Sen. Bernie Sanders at a recent public forum displayed a profound misunderstanding of right-to-work laws. At the April 1 summit We the People, a union member asked Sanders, who is seeking the Democratic Party presidential nomination, to affirm his pro-union credentials. He said:

There are two workers, one is nonunion and one is union, and the union employee has good wages, benefits, and retirement. The nonunion worker is in a right-to-work state where they can't even get the right to join a union, so what would you do as president to make sure that workers’ rights in the workplace are stood up for?

In response, Sanders stated that this is why we need his legislation, the Workplace Democracy Act. “In America,” he said, “workers have the constitutional right to organize, that is called freedom of assembly, and therefore in that legislation, we outlaw the ability of states to pass and maintain right-to-work legislation.” Also, under the act, when a union tries to organize a work site, the decision would no longer be decided by a secret ballot.

Both the question and the answer are based on a false understanding of what right-to-work laws do.

The First Amendment protects not just our right to speak, associate and assemble, but also the right not to do those things. And states with right-to-work laws do a better job protecting First Amendment rights than states that compel individuals to associate with and pay unions.

Right-to-work does not mean that people cannot join a union. Take, as an example, Michigan’s right-to-work statute:

An individual shall not be required as a condition of obtaining or continuing employment to do any of the following:

(a) Refrain or resign from membership in, voluntary affiliation with, or voluntary financial support of a labor organization.

(b) Become or remain a member of a labor organization.

(c) Pay any dues, fees, assessments, or other charges or expenses of any kind or amount or provide anything of value to a labor organization.

(d) Pay to any charitable organization or third party an amount that is in lieu of, equivalent to, or any portion of dues, fees, assessments, or other charges or expenses required of members of or employees represented by a labor organization.

The union member from Pennsylvania who asked the question lives in a state where workers can be fired for not paying a union. Michigan law says no one can be fired for choosing to be part of a union, or for not joining a union. So which state is standing up for the rights of workers? States with right-to-work do a better job protecting workers and allowing them to decide who they do and do not want to associate with.

Workers in Michigan have more opportunity and control over who they want to associate with and how their paychecks should be spent than workers in Pennsylvania, or other states without right-to-work.