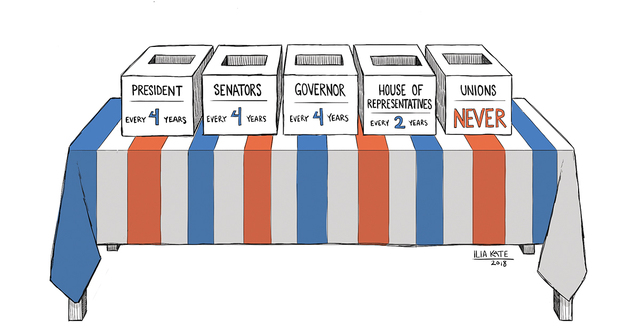 Let's Give Workers Voting Rights to Keep or Reject Unions

Editor's Note: This article originally appeared in The Hill on June 14, 2019.

Michigan Gov. Gretchen Whitmer recently stated that she would “love to sign a bill that repeals right-to-work.” Michigan has been a right-to-work state since 2012, when then-Gov. Rick Snyder signed the Freedom to Work legislation into law. In all, 27 states are right-to-work, giving workers the freedom to choose whether to join and pay a union — or not.

That makes right-to-work a mainstream policy. States including Arizona, Florida, Nebraska, Tennessee and Virginia have ensured the freedom of their workforces since the 1940s. Other states, such as Kentucky, Michigan and West Virginia, recognized the benefits of adopting right-to-work laws within the past decade.

A majority of states have decided to protect the rights of all workers by prohibiting employers and unions from forcing people to pay a union in order to keep a job and earn a living. This gives workers more freedom and control over their lives and their paychecks. But workers in all states, not just some, should have the freedom to have a job without forced unionization.

Unions decry right-to-work laws, and many Democratic presidential hopefuls pander to labor unions by saying they want to use federal power to overturn state right-to-work laws. Such a sweeping action would force workers to pay unions to be guaranteed jobs where co-workers have organized sometime in the past.

If Democrats really cared about giving workers a voice and increasing worker freedom, they would not seek to topple right-to-work laws. Instead, they would advocate for worker voting rights. In many unionized workplaces, unions continue to represent workers at the bargaining table when those workers don’t want them to. Unions in a lot of states have a captive audience: Once they are certified as a bargaining unit, it is difficult to get them decertified.

This phenomenon — call it the “captive audience syndrome” — has led unions to become more and more unresponsive to the workers they represent, and they focus on things that don’t have to do with collective bargaining.

In the words of one AFL-CIO labor union, “The main purpose of labor unions is to give workers the power to negotiate for more favorable working conditions and other benefits through collective bargaining.” And yet, unions often spend much of their time, effort and money on other activities, including political and lobbying activities, as well as administrative and overhead costs. For example, the Michigan Education Association, the state’s largest teachers union, in 2018 spent only 9 percent of its disbursements on collective bargaining.

The solution to the problem of the captive audience syndrome and unions spending much of their funds on activities that aren’t directly involved in collective bargaining is to give workers voting rights over continued representation by the union.

Voting rights would allow workers represented by a union to recertify that union on a regular basis. Another option is a law saying that a union is decertified (or must hold a recertification election) if a majority of employees it represents no longer are members. Iowa and Florida have adopted recertification legislation.

In Iowa, public employees have the right to recertify their union on a regular basis. To win reelection, unions must receive a yes vote from the majority of people in the bargaining unit. In Florida, unions that represent instructional personnel must report annually to the state how many of them are in the bargaining unit and the percentage who are members. If membership falls below 50 percent, the union must hold a new election and be recertified.

Recertifications require unions to provide a higher level of service and responsiveness to the workers for whom they are supposed to bargain. Unions often continue to represent a class of employees, many of whom aren’t members and who do not want the union negotiating on their behalf. But every worker deserves a voice. Worker voting rights gives them that voice.