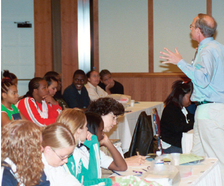 More than 300 high school debate students and their instructors from across Michigan attended Debate Workshops hosted in September by the Mackinac Center for Public Policy.

"For 18 years now, the Mackinac Center has been assembling top-notch teams of experts to assist Michigan high school students with the national debate topic," says Lawrence W. Reed, president of the Mackinac Center. "This year the Center is offering four $1,000 college scholarships to the winners of essay contests, so the benefit to the students of attending these sessions is greater than ever."

The Debate Workshops are the Mackinac Center’s longest-running program and have shown more than 8,000 students how to debate arguments and ideas that they may not have received from other sources. This year’s Debate Workshops were held in Livonia, Jackson, Grand Rapids and Traverse City.

This year’s debate resolution, "Resolved: That the United States federal government should substantially decrease its authority either to detain without charge or to search without probable cause," is an exciting and timely one. The National Federation of State High School Associations report on this topic begins with this quotation:

"The American Constitution was designed to limit and constrain the use of power in order to protect liberty. But as the founders knew, and as has become even more clear in modern times, liberty can be threatened even by well-meaning people. Justice Louis Brandeis put it well: ‘Experience should teach us to be most on our guard to protect liberty when the government’s purposes are beneficent. . . . The greatest dangers to liberty lurk in insidious encroachment by men of zeal, well-meaning but without understanding.’"

This will be an important and educational topic for students as they work to understand how the Constitution was designed to protect both civil and economic liberties, and yet to be flexible through the amendment process.

This year’s Debate Workshop speakers were prominent experts in their respective fields. Dr. Richard Edwards, professor of communication studies at Baylor University, has been the author of the "topic introduction" issue of the Forensic Quarterly since 1972 and has also been a college debate coach for 25 years. Mike Winther has written articles on many public policy issues and is a frequent lecturer at debate camps and has 30 years of experience as a debater and coaching debate. His teams have ranked among the top 10 in the nation. Gregory Rehmke, who has lectured and published widely on the economics and history of a variety of public policy issues, directs educational programs for Economic Thinking/E Pluribus Unum Films, a nonprofit organization in Seattle, Wash. This year’s debate workshops also included special appearances in Livonia and Jackson by Kary Moss, executive director of the ACLU of Michigan since 1998.

Comments from coaches and students alike were very affirming of this year’s dynamic team of speakers. "Need a ‘kickstart’ to your debate year? Attend one of the Mackinac Center workshops," one student who attended the Jackson workshop wrote. Not often does one hear students asking for sessions to be longer, but this year students wanted as much information as they could obtain from each of the experts. One coach commented: "This was the best program in 10 years; good balance; excellent points for both the negative and the affirmative sides; excellent speakers." Responses like "awesome," "best in several years," "I will be back," "great way to start out each new debate season," are just a few examples of the feedback that were received at the conclusion of the workshops.

Visit www.mackinac.org/debate to learn more about debate and have access to an interactive function called, "Ask the Debate Coach," which provides e-mail access to experts who answer student debaters’ questions about their subject or about debating itself. To get information on the 2006 Debate Workshops, please contact mcpp@mackinac.org or call Amy Kellogg at (989) 631-0900.