Privatization shows signs of growth across the state 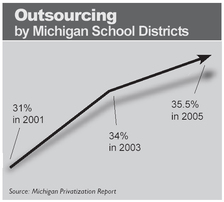 The number of public school districts outsourcing one or more noninstructional services increased during the past two years, according to a Mackinac Center for Public Policy biennial survey. Despite opposition, many districts are reporting savings and successful services, and even those that have contracted out for services and have later brought them back in-house attest to the benefits of the experience.

Outsourcing, also known as privatization, occurs when a government agency signs a contract to pay for a service provided by an outside, privately owned company.

Of the 552 school districts surveyed, 35.5 percent contract out for at least one of the three major non-instructional services: busing, janitorial or food. This figure is up from the 2003 survey results of 34 percent. The growth occurred despite the fact that 27 districts brought once-contracted services back in-house in the last two years.

The bulk of those districts opting for privatization, 156, did so for food service. This includes either management of the program, where the district retains the staff, or wholesale privatization, in which a private company hires its own employees to serve students. Another 48 districts contracted for some type of janitorial service and 21 employed private busing contractors. The survey totals only included contracts with private providers, and excluded service arrangements with other public entities.

Of those districts that contract out, 80 percent reported savings resulting from privatization. While 27 districts admitted that they did not know whether they had saved money or not, only eight districts said the contract did not save them money. Some superintendents told the Mackinac Center that they did not care if the contract saved them any money, they just did not want to provide certain services. The majority of districts that contracted out, 176, reported being happy with the services provided.

In one prominent instance of privatization, Grand Rapids Public Schools signed an $18 million contract with Dean Transportation to transport students for the next five years, and so far results seem to be positive. According to an Aug. 31 report in The Grand Rapids Press that was summarized in Michigan Education Digest, the district reported fewer transportation-related calls on the first day of school than they have received in previous years.

The Michigan Education Association has lost dues revenue as schools have privatized custodians, cooks and bus drivers that the union has been unable to organize. According to The Grand Rapids Press, MEA Communications Director Margaret Trimer-Hartley said that contractors’ "business is making profits. They cash in as time goes on."

In 1994, it was discovered that the MEA was using non-union, private companies at its headquarters in East Lansing, Mich. That same year, the Michigan Legislature passed Public Act 112, which took the privatization of custodial, food service and busing services off the list of mandatory bargaining issues for conventional public school districts.

Districts that decide to bring a previously outsourced function back in-house attest to the benefits of the experience. South Lyon Community Schools in Oakland County, for example, had been outsourcing the management function of its custodial services.

"Once they got the contract, the support for the people they assigned to us was less and less," said Jim Graham, assistant superintendent for business and finance. "We ended up hiring them directly and kept the profit margin in the district."

Graham said the district has since won an award for preventive maintenance based on the work of a person it hired from the private company.

"I guess indirectly we benefited from the outsourcing," he said. "It’s a semi-success."

Elsewhere in Oakland County, the Auburn Hills-Avondale School District is in the third year of a contract with Chartwells Food Services.

"The board has been satisfied with the service and performance," said Tim Loock, assistant superintendent. "They’re pleased with the way it’s going."

"We have an on-site food services director as part of the contract," Loock said. "If someone has a concern or complaint, they can contact her directly."

Loock said the decision to outsource the food service came down to one thing: money.

"We’re strapped for cash," he said. "You don’t privatize food service if it’s making money and no one is getting sick. When it becomes a drain on your general fund, you put it out for bids."

Loock said that according to state law, the contract must be put out for bids after five years if the district wishes to continue outsourcing food service. The contract is now being renewed on a yearly basis.

When asked about what the most significant barriers to privatization were, 25 percent of respondents in the Mackinac Center survey said employee or union opposition.

It is possible that privatization has not reached a saturation point. Only one-third of the districts contract out for at least one service. Moreover, there is no reason to believe that districts could not and are not adopting privatization for other functions, such as security or lawn maintenance.

Competitive contracting will likely remain a potent force in school districts across the state, especially if news of privatization successes outweigh the failures. Whether it stops growing or explodes in its depth and breadth remains a question that could be answered with the next survey, scheduled for 2007.