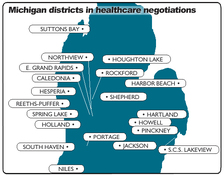 "One thing that we are sure everyone agrees with is that health care cost increases have far exceeded school districts’ ability to pay without cutting essential services to students," said Kevin O’Neill, superintendent of the Coopersville Area Public Schools and president of the Ottawa Area School Superintendents Association, in testimony before state Senate committees last August.

Critics say that MESSA drives up costs by charging excessive rates and serves as a funding conduit to the MEA, which pushes for MESSA coverage in contract negotiations. A 1993 Mackinac Center for Public Policy study concluded that MESSA imposed excessive administrative fees on school districts and showed how MEA used MESSA resources to augment the union’s organizational strength and political power.

"In a number of districts, the fuel gauge is on empty," O’Neill added. "The much welcomed, anticipated state aid increase of $175 per pupil is not even covering the increase in our retirement rates and the double-digit health care expense increase."

The hearing was prompted in part by the findings of a Senate-commissioned study to determine whether health insurance coverage for public school employees could be managed in a more cost-effective manner. The study, released in July by the Virginia-based consulting firm Hay Group, estimated that the total medical care cost for more than 190,000 school district employees and their dependents will be $2.2 billion in the 2005-2006 school year. The study found that dental and vision benefits will likely cost an additional $150 million.

According to the Hay Group study, three fourths of school districts, with 53 percent of all public school district employees, obtain their health insurance through MESSA.

This issue is not confined to one part of the state. It is part of contract negotiations at districts large and small, urban and rural, as school boards struggle to bring health insurance costs under control.

Lakeview Public Schools in August implemented a contract proposal for teachers that provided a 3.5 percent pay increase coupled with a shift from MESSA coverage to premium Blue Cross/Blue Shield PPO insurance. The board took this action when it reached an impasse with the Lakeview Education Association over MESSA insurance, according to Superintendent Sandra Feeley Myrand.

The switch is projected to save up to $500,000, allowing the school board to avoid layoffs, provide teachers with a pay raise and still maintain "outstanding health care" coverage for employees, Feeley Myrand said.

While she is grateful for the $175-per-pupil increase provided by the state, Feeley Myrand said it cost the district more than that just to meet obligations in the new teachers’ contract. "We estimate that just to pay for the raise, health care and retirement will cost $220 per student," she said. That means none of the extra spending makes it to the classroom.

In September, the union, which represents more than 180 teachers in the St. Clair Shores district, sued the Lakeview board for unfair labor practices, the Macomb Daily reported. "We believe they are violating the law and imposing a changed working condition without bargaining to an impasse," an attorney for MEA/NEA Local 1, told the Macomb Daily.

The Houghton Lake Board of Education, facing a $600,000 deficit, was warned by a CPA who reviewed the district’s financial report to "take immediate action" to cut costs, according to The Houghton Lake Resorter. Among his recommendations, which were delivered at a September special meeting, was that the board seek quotes from Blue Cross/Blue Shield for comparable health care benefits which, he said, "should reduce your cost from your current MESSA contracts."

In early October, the school board in Hesperia declared an impasse in mediated contract negotiations with the teachers’ union and announced it would require teachers to start paying 12 percent of their MESSA health care premiums, The Muskegon Chronicle reported. Prior to that move, Hesperia teachers did not pay any share of their premiums and medical deductibles were paid by the district, the newspaper reported.

A survey conducted by Michigan School Business Officials in May found that 84 percent of Michigan school districts modified their health care plans during the previous year. The survey found that districts employed different strategies to lower costs: 73 percent increased their co-pays or deductibles, 70 percent shifted to a lower cost plan and 42 percent instituted or negotiated premium sharing with employees.

"Next to school finance, (the cost of health care is) the biggest issue facing schools," said MSBO Executive Director Tom White. "In some districts it’s bigger."

After seven months of negotiations, the Holland board of education chose a less expensive health insurance plan that will require teachers to pay $199 a month toward their own coverage. The district had been paying more than $15,300 per teacher annually for health care, but switched to a less expensive plan costing about $13,000 per teacher per year.

In this fiscal climate, public school employees find themselves making tradeoffs between health coverage and wage increases. A number of teachers around the state appear willing to forgo the most costly and extensive health care insurance options in favor of a pay raise.

In Jackson, the switch to a managed health care plan allowed the school board to save about $200,000 annually, avoid a 15 percent to 17 percent insurance increase and approve a 2 percent raise for teachers, the Jackson Citizen Patriot reported.

The Shepherd Public Schools school board is offering teachers two options as they negotiate a new contract: Teachers can have MESSA Choices II with no pay increase or accept a Blue Cross/Blue Shield PPO and receive a 2.95 percent pay raise.

The shift from MESSA to lower cost insurers could become a trend, according to a report in Michigan Health Plan Analysis. HealthLeaders-Interstudy, a healthcare business information company that provides integrated data and analysis, analyzed five education groups in the Pinckney Community School district – including three collective bargaining units – that dropped their MESSA insurance for Care Choices HMO.

"It’s evident how MESSA is vulnerable to competitors when it seeks 10 to 12 percent premium increases while the company that its network is built upon, Blue Cross Blue Shield of Michigan, is trumpeting its smallest increases in a decade—in the mid-single-digits in some segments," the report concluded. "Insurers who can find that middle ground on price may be able to compete for education groups, but they better come armed with quality data as Care Choices did in Pinckney."

The search for cost savings has some school districts banding together for a solution. The school districts of Reeths-Puffer, Spring Lake, Caledonia, East Grand Rapids, Northview, Rockford, South Haven, Kent Intermediate School District and Ottawa Area Intermediate School District expect to save thousands of dollars annually by switching health care coverage for school administrators and non-union support staff, The Muskegon Chronicle reported in September. These districts currently receive their coverage through MESSA, but by forming the West Michigan Health Insurance Pool they hope to bring in competitive alternatives.

The increasing cost of health care benefits for retired school employees is also draining resources from the classroom, according to findings from the Citizens Research Council of Michigan, a private, nonprofit public affairs research organization that provides nonpartisan analysis of state and local government organization and finance.

The magnitude of the problem has state legislators searching for a solution. Senate Bill 896, introduced by Sen. Shirley Johnson, would allow districts to pool resources, as was done in West Michigan, in purchasing health insurance. In Oakland County, where Johnson lives, that could amount to a cost reduction of $6 million to $8 million annually.

The Hay Group study also estimated that school districts will pay an average of $11,362 for health insurance per employee, compared to $9,212 spent on state employees.

"The impact (of these higher costs) is devastating," said Rep. Barb Vander Veen. "We absolutely need to do something. It has a definite impact on the education of Michigan students. We’re seeing 12, 15, 18 percent increases in a year’s time. … I would not hesitate to call it a crisis situation."

Part of the answer is to provide school districts with more health coverage choices, said Vander Veen, a member of the House Education Committee. "[I]njecting competition will result in costs going down," she said.

Unlike most insurers, who provide claims data to their clients, MESSA refuses to release the health claims histories of individual school districts. Vander Veen’s bill would require MESSA to disclose this information to allow potential alternative insurance administrators to estimate the cost of providing health coverage and offer competitive bids.

Rising health care costs, combined with tight budgets, means we are living in an era of limits, said Rick Murdock, executive director of the Michigan Association of Health Plans. "As healthcare costs increase, both for employees and retirees’ healthcare packages, it’s coming at the price of salary increases for current staff, or instructional resources," Murdock told the Michigan Health Plan Analysis. "It’s almost zero-sum. With a limited pool of money, you’re either going to spend it on benefits or spend it on education."