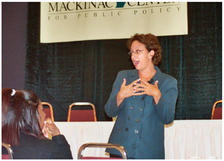 Kary Moss, executive director of the Michigan ACLU, spoke at two Mackinac Center events in Michigan this fall. Her lectures were part of the Center’s High School Debate Workshops program.

From 2002 to 2005, Detroit Public Schools collected $259 million in unauthorized property taxes from nonhomestead owners. While it is not clear how the mistake was made or whether the district will have to repay the amount, the improper tax has negatively affected the district’s credit rating, thus making it more expensive to finance its growing debt.

An 18-mill school operating expense tax on commercial property and rental housing was authorized in a November 1993 vote, and expired on June 30, 2002. School officials continued collecting the tax over the following three years.

It has not yet been determined how the district overlooked the renewal. The 1993 millage election came at a time when school districts were anticipating the transition to the new financing system created by Proposal A, which was to be on the ballot on March 15, 1994, and which would peg future state school aid to local property tax rates.

The error came to light in July of this year, just as the district was preparing to market a $500 million debt restructuring bond. The district was forced to amend the prospectus for new bonds with an addendum in which the error was disclosed. At the same time, the district announced it would seek reauthorization of the 18-mill tax, which subsequently passed by a 2-1 margin on the Nov. 8 ballot.

It is unknown if the district will be required to repay the mistakenly collected taxes. A week after that first announcement, the district appended a second "addendum" to a new bond disclosing that taxpayers had filed two class action lawsuits seeking return of the unauthorized taxes: one in Wayne County Circuit Court, and a second in the Michigan Tax Tribunal. The Tribunal quickly threw out its suit, noting that it does not allow class actions. State law says individual taxpayers must appeal disputed tax bills within 30 days of receiving them. That 30-day deadline affected not just prior tax years – it had also passed for any cases related to taxes billed in 2005. The circuit court case is still proceeding, however, and it seems likely that more suits will be filed.

If the district were forced to refund the improperly billed taxes and was unable to service its debt, under Michigan law, the creditors (meaning bond holders) could force a new "judgment levy" to be added to tax bills without any popular vote or action by the district, according to the new bond offering document. If this were to happen, there would be no aggregate tax savings, only a partial shift in the tax burden from business and rental property owners to homeowners.

The effect on the district will be to raise its cost of borrowing. Detroit Public Schools’ biggest problem currently is remedying its deficit. In 2004, the district’s total revenue was $1.5 billion. State aid made up $1.1 billion of the revenue. Federal sources provided $240 million, and $150 million came from local taxes, $79 million of which was the unauthorized property tax. Expenditures were $1.6 billion, which created a $122 million deficit. Over three years, the unauthorized tax comprised just 6.3 percent of annual operating revenue.

Under state law, schools are not allowed to have a deficit; school budget deficits trigger a requirement that the district adopt a state-approved "deficit reduction plan," a measure Detroit put in place last winter. In light of pre-existing demographic pressures — the number of children attending Detroit schools is expected to fall from 150,000 in 2003 to 102,000 by 2009 — Detroit’s plan is rigorous. Over five years district spending will decline from $1.6 billion to $1.2 billion, or 22.9 percent. Approximately 100 schools will be closed

To cover the immediate shortfall and cash flow needs, the district took on $161 million in new short-term debt due next March, and refinanced another $210 million short term loan to stretch it out over 15 years. This new borrowing comes against a backdrop of $1.6 billion in outstanding debt, or $1,817 for each of Detroit’s 900,863 residents. The school debt is equal to 19 percent of the taxable value of all the buildings, land and business equipment in the city.

Because of the improperly collected taxes, financing the district’s current debt has become more expensive. As a result of the taxes, the major bond rating companies downgraded the school district’s debt to one mark above junk bond status and placed it on "credit watch." Just as with individuals, the interest rates paid by a governmental entity are determined by its credit rating, so the district can expect to pay more. If the district drops into noninvestment grade status, the problem is compounded because certain large institutional investors can no longer lend to the district, reducing the pool from which it is able to borrow.