Amtrak Privatization: All Aboard! 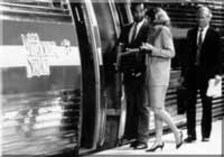 But 28 years later, Amtrak remains stationed at the depot of government subsidies. Privatization could put the national passenger train back on track.

With the Congressional creation of the National Rail Passenger Corporation in 1970, Amtrak began life with the goal of improving passenger rail service while earning a profit after only two years of federal financial assistance. But 28 years later, Amtrak remains stationed at the depot of government subsidies. Privatization could put the national passenger train back on track.

Amtrak is not the nation’s first experience with subsidized rail service. Nineteenth century America provides numerous examples of government-subsidized train ventures that failed to become profitable. Politically connected entrepreneurs of the 1800s were given generous grants by Congress to lay track and connect the young nation with a great system of railroads. Every one of these subsidized transcontinental ventures ended in failure and bankruptcy. The only transcontinental to survive was the privately funded and operated Great Northern Railroad of James J. Hill, which continues to operate today as Burlington and Northern.

Michigan’s experience at this time was no different. The state’s first governor, Stevens T. Mason, condemned privately run railroads as "extortion from the public" and directed the sale of $5 million in bonds to fund several state railroad and canal projects. When all the dust settled, the money lost on these projects had nearly bankrupted the new state’s treasury. Eventually, the railroads were sold off to private interests, who had them completed and running profitably in a short time.

Amtrak’s history is remarkably similar. In fiscal year 1971, Congress appropriated $160 million (in 1997 dollars) to fund Amtrak’s first year of operation. Since then, Amtrak has received over $13 billion from the U.S. government, including approximately $9.6 billion for operating subsidies and $2.3 billion for its Northeast Corridor Improvement Plan. In 1983, the federal government went on to relieve Amtrak of responsibility for another $1.1 billion in federal loan guarantees.

Why is Amtrak so unprofitable? One of the reasons is the extraordinarily low demand for passenger rail service, which accounts for less than 0.5% of all intercity trips each year and less than 0.007% of daily work commutes. Busy highways and airports continue to draw most passenger traffic, even in the northeast corridor, where Amtrak patronage is traditionally higher.

Under current CEO Thomas Downs, Amtrak has reduced its operations deficit; however, this reduction has come at an operational price. Amtrak’s reduced expenses have come about largely by lowering the quality and quantity of services rather than improving the efficiency of providing those services.

Reducing services is not necessarily a poor business decision, but Amtrak was originally sold to American taxpayers as a way of improving rail passenger services at a minimal cost. The decision to cut services while accepting greater government subsidies is a hallmark of a bureaucracy trying to survive and not a for-profit, private business seeking out and serving customers.

Despite these problems, some Michigan politicians are championing a Detroit-to-Lansing Amtrak route, in part to help persuade 1,200 Lansing General Motors (GM) workers who may be transferred to a Detroit work site from moving to Detroit. The Gannett News Service reports State Representative Lingg Brewer (Lansing) as saying (in reference to GM’s move), "We’ve got to have something in the next calendar year, or we’ll be losing Oldsmobile employees." Tim Martin, author of the Gannett article, reports that a Detroit-to-Lansing Amtrak route "would require an estimated $7.5 million for track improvements and $4 million in annual operating costs for Amtrak."

The golden age of the passenger train has faded from view. Automobiles and airplanes now offer speed and flexibility that is unmatched by any train service, subsidized or not. Americans have a lasting love affair with their cars and the independence that they provide. And Michigan’s stature as automobile capital of the world makes it a particularly unlikely candidate for the grand designs of Amtrak expansion.

Instead, it is time to derail unending subsidies to Amtrak as a passenger train provider. Billions of dollars in tax money have provided no benefit that could not have been more effectively provided by a competitive marketplace in rail service. The federal government should privatize Amtrak by phasing subsidies out and allowing the national train business to make a run of it alone.

While passenger rail service is no longer in high demand, there are other profitable opportunities and markets for Amtrak that entrepreneurs willing to take risks might pursue.

America and Michigan share a long and checkered past with government-provided train service. Privatization—not more subsidies—will give Amtrak the incentives it needs to improve its passenger service and efficiency.