"An astonishing rabble of impudent nobodies" 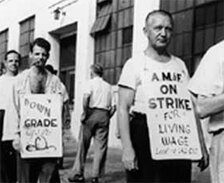 SPECIAL POWERS GRANTED to organized labor with the passage of the Wagner Act contributed to a wave of militant strikes and a “depression within a depression” in 1937.
Archives of Labor and Urban Affairs

Roosevelt's haphazard economic interventions garnered credit from people who put high value on the appearance of being in charge and "doing something." Meanwhile, the great majority of Americans were patient. They wanted very much to give this charismatic polio victim and former New York governor the benefit of the doubt. But Roosevelt always had his critics, and they would grow more numerous as the years groaned on. One of them was the inimitable "Sage of Baltimore," H. L. Mencken, who rhetorically threw everything but the kitchen sink at the president. Paul Johnson sums up Mencken's stinging but often-humorous barbs this way:

Mencken excelled himself in attacking the triumphant FDR, whose whiff of fraudulent collectivism filled him with genuine disgust. He was the 'Fuhrer,' the 'Quack,' surrounded by 'an astonishing rabble of impudent nobodies,' 'a gang of half-educated pedagogues, nonconstitutional lawyers, starry-eyed uplifters and other such sorry wizards.' His New Deal was a 'political racket,' a 'series of stupendous bogus miracles,' with its 'constant appeals to class envy and hatred,' treating government as 'a milch-cow with 125 million teats' and marked by 'frequent repudiations of categorical pledges.'[33]