New Dealing From the Bottom of the Deck

THIS 1989 PHOTO is of a bridge built from 1936-41 as part of a Works Progress Administration (WPA) project in Coleman County, Texas. Many Americans saw such projects as helpful, without considering their high cost and the corruption that plagued the program.
Library of Congress

Crisis gripped the banking system when the new president assumed office on March 4, 1933. Roosevelt's action to close the banks and declare a nationwide "banking holiday" on March 6 (which did not completely end until nine days later) is still hailed as a decisive and necessary action by Roosevelt apologists. Friedman and Schwartz, however, make it plain that this supposed cure was "worse than the disease." The Smoot-Hawley tariff and the Fed's unconscionable monetary mischief were primary culprits in producing the conditions that gave Roosevelt his excuse to temporarily deprive depositors of their money, and the bank holiday did nothing to alter those fundamentals. "More than 5,000 banks still in operation when the holiday was declared did not reopen their doors when it ended, and of these, over 2,000 never did thereafter," report Friedman and Schwartz.[19] 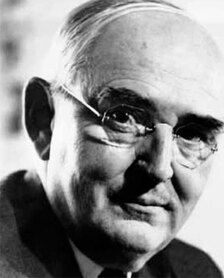 MICHIGAN SENATOR Arthur Vandenberg argued that a sound economy could not be restored through FDR’s punitive tax and regulatory measures.

Economist Jim Powell of the Cato Institute authored a splendid book on the Great Depression in 2003, titled "FDR's Folly: How Roosevelt and His New Deal Prolonged the Great Depression". He points out that "Almost all the failed banks were in states with unit banking laws" — laws that prohibited banks from opening branches and thereby diversifying their portfolios and reducing their risks. Powell writes: "Although the United States, with its unit banking laws, had thousands of bank failures, Canada, which permitted branch banking, didn't have a single failure ..."[20] Strangely, critics of capitalism who love to blame the market for the Depression never mention that fact.

Congress gave the president the power first to seize the private gold holdings of American citizens and then to fix the price of gold. One morning, as Roosevelt ate eggs in bed, he and Secretary of the Treasury Henry Morgenthau decided to change the ratio between gold and paper dollars. After weighing his options, Roosevelt settled on a 21 cent price hike because "it's a lucky number." In his diary, Morgenthau wrote, "If anybody ever knew how we really set the gold price through a combination of lucky numbers, I think they would be frightened."[21] Roosevelt also single-handedly torpedoed the London Economic Conference in 1933, which was convened at the request of other major nations to bring down tariff rates and restore the gold standard.

Washington and its reckless central bank had already made mincemeat of the gold standard by the early 1930s. Roosevelt's rejection of it removed most of the remaining impediments to limitless currency and credit expansion, for which the nation would pay a high price in later years in the form of a depreciating currency. Sen. Carter Glass put it well when he warned Roosevelt in early 1933: "It's dishonor, sir. This great government, strong in gold, is breaking its promises to pay gold to widows and orphans to whom it has sold government bonds with a pledge to pay gold coin of the present standard of value. It is breaking its promise to redeem its paper money in gold coin of the present standard of value. It's dishonor, sir."[22]

Though he seized the country's gold, Roosevelt did return booze to America's bars and parlor rooms. On his second Sunday in the White House, he remarked at dinner, "I think this would be a good time for beer."[23] That same night, he drafted a message asking Congress to end Prohibition. The House approved a repeal measure on Tuesday, the Senate passed it on Thursday and before the year was out, enough states had ratified it so that the 21st Amendment became part of the Constitution. One observer, commenting on this remarkable turn of events, noted that of two men walking down the street at the start of 1933 — one with a gold coin in his pocket and the other with a bottle of whiskey in his coat — the man with the coin would be an upstanding citizen and the man with the whiskey would be the outlaw. A year later, precisely the reverse was true.

In the first year of the New Deal, Roosevelt proposed spending $10 billion while revenues were only $3 billion. Between 1933 and 1936, government expenditures rose by more than 83 percent. Federal debt skyrocketed by 73 percent.

FDR talked Congress into creating Social Security in 1935 and imposing the nation's first comprehensive minimum wage law in 1938. While to this day he gets a great deal of credit for these two measures from the general public, many economists have a different perspective. The minimum wage law prices many of the inexperienced, the young, the unskilled and the disadvantaged out of the labor market. (For example, the minimum wage provisions passed as part of another act in 1933 threw an estimated 500,000 blacks out of work).[24] And current studies and estimates reveal that Social Security has become such a long-term actuarial nightmare that it will either have to be privatized or the already high taxes needed to keep it afloat will have to be raised to the stratosphere.

Roosevelt secured passage of the Agricultural Adjustment Act, which levied a new tax on agricultural processors and used the revenue to supervise the wholesale destruction of valuable crops and cattle. Federal agents oversaw the ugly spectacle of perfectly good fields of cotton, wheat and corn being plowed under (the mules had to be convinced to trample the crops; they had been trained, of course, to walk between the rows). Healthy cattle, sheep and pigs were slaughtered and buried in mass graves. Secretary of Agriculture Henry Wallace personally gave the order to slaughter 6 million baby pigs before they grew to full size. The administration also paid farmers for the first time for not working at all. Even if the AAA had helped farmers by curtailing supplies and raising prices, it could have done so only by hurting millions of others who had to pay those prices or make do with less to eat.